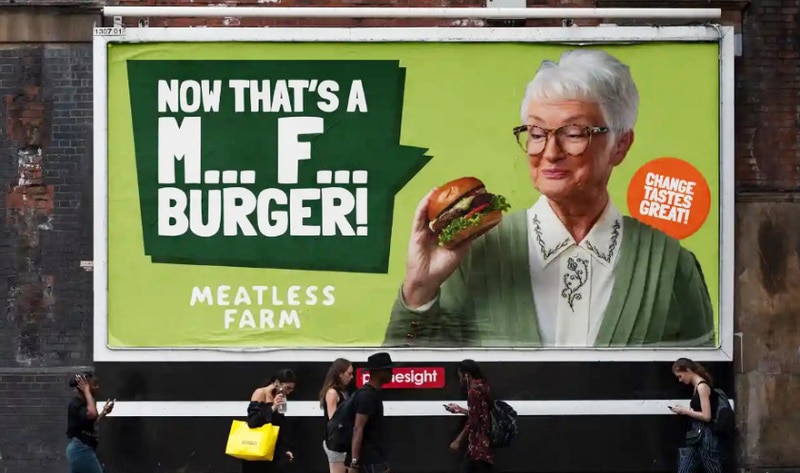 United Kingdom-based vegan brand The Meatless Farm Co. recently launched its “M*** F***” ad campaign that targets meat-eaters who made the switch to plant-based eating during the COVID-19 pandemic. The campaign includes ads with messaging such as “Now that’s a M… F… burger!” which includes traditional print advertising, 12 branded electric cars driving through London, England, billboards, bus signs, and a radio ad. The £1.5 million (US$1.96 million) campaign is the company’s most extensive campaign to date, and the second campaign it has produced in the last six months after seeing a significant rise in consumer demand for plant-based meat products. The on-pack branding will also get a revamp with the new M*** F*** messaging to further support the campaign.

“Throughout lockdown, we’ve seen a surge in sales, with more and more British consumers trying or considering swapping to plant-based, even if it is just once a week,” Michael Hunter, Chief Growth Officer at Meatless Farm, told media outlet Food Ingredients First. “We felt the nation needed a bit of a lift as it’s been a tough time for everyone, so more than ever, we wanted to create something light-hearted and fun that consumers would remember when they are looking for alternatives to meat.”

In 2018, Meatless Farm made its retail debut at 600 Sainsbury’s supermarkets across the UK before expanding its product line to Whole Foods Markets across the United States in August 2019. In June, the company successfully expanded its distribution to Australia.

Awesome Calculator Tells You How Many Animals, Gallons of Water, and Carbon Emissions You Can Save By Not Eating Meat

Many Environmental Scientists Left Under Trump. Can Biden Bring Them Back?