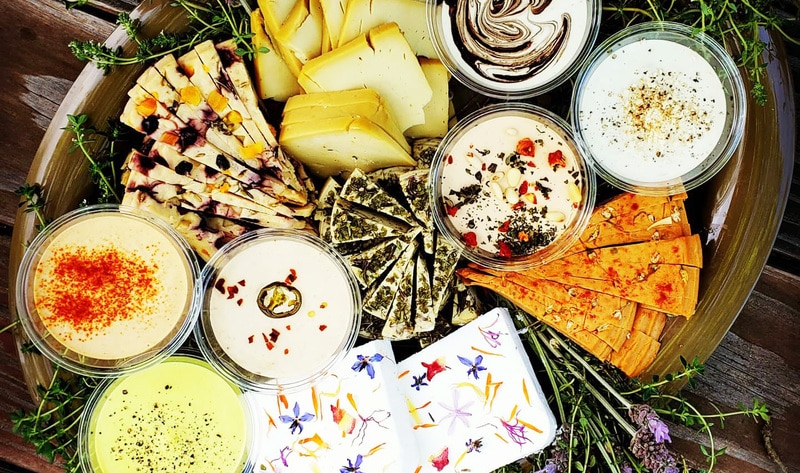 New vegan cheese shop The Vreamery recently opened at the Paso Market Walk Public Market in Paso Robles, CA. The Vreamery owner Jennifer Golden produces house-made, hand-crafted vegan gourmet cheese and curates a selection of regionally produced cheese products from other artisans—with an emphasis on West Coast producers—such as The Uncreamery, Reine, Jule’s Foods, and Miyoko’s Creamery. The shop also serves curated cheese boxes that feature house-made salami and a daily Melt Bar Special, which is typically a hot, melty, gooey, and cheesy dish, such as panini or mac and cheese. The company got its start by serving its products at local farmers’ markets and veg fests around Central California.

“As many do, I found cheese to be the hardest thing to give up [when I went vegan],” Golden told VegNews. “So I started learning from the vegan cheese leaders online at YouTube University and began playing with nuts and cultures. That was it! I was making more than I could share, so I started with selling at farmers’ markets and offering these products to the community. With the terrific response I received I knew I was on to something big. We’ve only been open for two weeks now, but we have been swarmed with people from far and wide, all of whom express such appreciation, gratitude, and relief that they now have us as a resource seven days a week.”

Golden plans to expand offerings with more West Coast brands and possibly expand The Vreamery house line if she is able to secure a business partner or investor.

Volvo’s Future Polestar Models Will Use Only Sustainable Vegan Materials