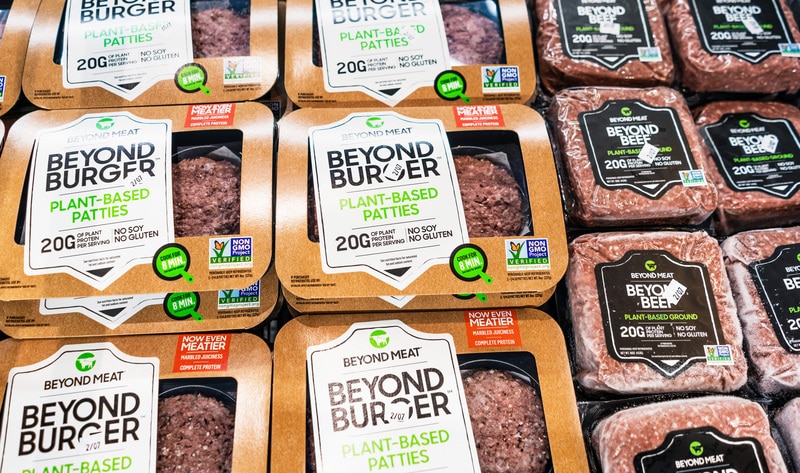 Retail sales of Beyond Meat’s vegan products increased by 194.9 percent in the second quarter of 2020, the company shared in its most recent earnings report. While the vegan brand’s foodservice sales slipped by 60.7 percent (which was to be expected in light of the ongoing COVID-19 pandemic) contributing to a net-loss of $10.2 million during the time period, its year-over-year net revenues increased by 69 percent to $113.3 million. To mitigate foodservice losses, Beyond Meat spent $5.9 million to repackage its products for retail sale—a move that seems to have paid off.

The spread of COVID-19 led to higher animal meat prices and lower availability due to slaughterhouse closures as thousands of workers became infected with the virus. During this time, Beyond Meat strategically released its Beyond Burger in a 10-pack bulk format at a steep price cut to approximately $1.60 per patty.

“We had a lot of help from the beef industry itself, because they’ve been experiencing some very high pricing,” Beyond Meat CEO Ethan Brown said about the company’s second quarter success in the retail sector. “You will see us continue to push pricing. We believe that through the continuing maturity of our supply chain, particularly around the protein costs, a lot more protein supplies are coming in the market as well as the growth of our own operations in the United States and globally.”

During its second quarter, Beyond Meat also spent $1.6 million on its Feed A Million+ campaign which provided more than one million vegan burgers to frontline workers and others in need during the ongoing pandemic.