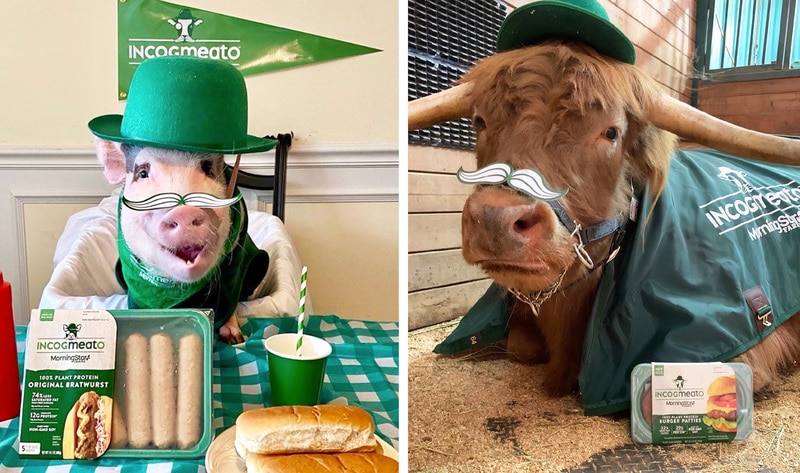 In time for Labor Day, vegetarian brand MorningStar Farms—a subsidiary of the Kellogg Company—launched a creative campaign to promote its new Incogmeato vegan meat brand. In 2019, the brand debuted the Incogmeato line with three products (plant-based burger patties, chik’n nuggets, and chik’n tenders) before expanding with two flavors of soy-based vegan sausages early this year. For the campaign, the brand partnered with three animal influencers—@SammiChicken, @Prissy_Pig, and @BuckleyTheHighlandCow—who donned green bowler hats, mustaches, and monocles (to imitate the vegan line’s branding illustrations) and urged their followers to give plant-based meats a try.

“We’re challenging people to try plant-based and see how delicious Incogmeato really is,” Sara Young, General Manager of Plant-Based Proteins at Kellogg Company, said. “And who better to convince skeptics than animal influencers? It brings Incogmeato characters to life—and gets Incogmeato on the plates of skeptics in a really unique way.”

As part of the campaign this week, the “spokes-animals” will pose the questions “What are you waiting for? Afraid you might like it?” on their Instagram accounts and offer a coupon for a free sample of Incogmeato’s vegan products through Friday.

Eat by Color: Tasty and Cute Pink Vegan Recipes Made with Strawberries, Cherries, Beets and More!