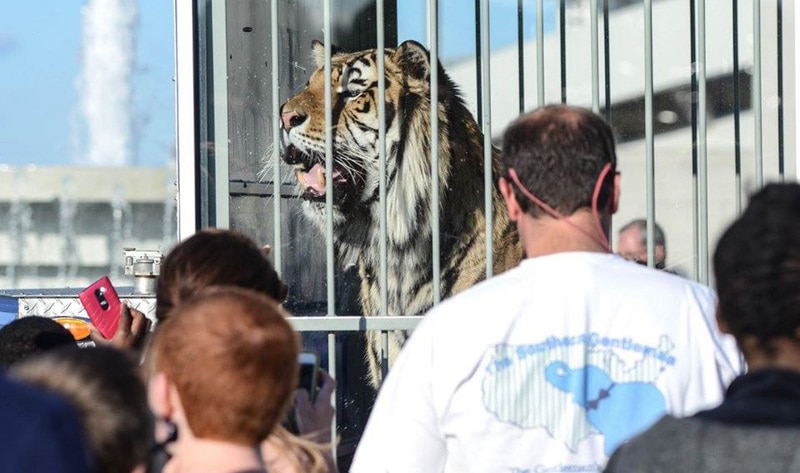 Nearly 10,000 people have signed a petition demanding The University of Memphis (U of M) cease exploiting live tigers at its football games. For more than 40 years, U of M has used live tigers—all three of which were named “TOM” (Tigers of Memphis)—as mascots during noisy football games. Animal-rights group In Defense of Animals (IDA) launched the petition to end the practice, citing ethical and legal concerns of keeping the apex predators captive for the purpose of taking photos or intimidating competing teams.

“Forcing wild animals who are very sensitive to their surroundings into crowds of screaming people is stressful and cruel. Taking pictures with TOM III also sends a harmful message and teaches fans that wild animals belong in cages, rather than in their native habitats, and that they exist for our entertainment,” Lisa Levinson, Wild Animals Campaigner for IDA, said. “It’s time to leave TOM III at home, instead of carting him around to attend games.”

The first TOM lived in a garage after which he was sent to a local zoo where he was a “popular attraction” for 20 years. The second TOM lived in a $300,000 enclosure at St. Nick’s Farm and Zoological Park, where he died of cancer at 17 years old. The third TOM’s secret enclosure reportedly cost $700,000 to build.

“The university already has Pouncer, a human mascot, who would be a better fit to appear at upcoming games,” says IDA President Marilyn Kroplick, MD while urging U of M President M. David Rudd to take immediate action. “Why cause undue stress and suffering to TOM III when The University of Memphis has a perfectly capable human mascot [named] Pouncer?” Kroplick said. “President Rudd, this is your golden opportunity to launch an educational and ecologically sound campaign to keep wild animals in the wild. Please announce your decision to end the use of live animal mascots, and bring Pouncer to future games while leaving TOM III at home.”

In light of the popularity of Netflix series Tiger King—and the subsequent closure of the roadside zoo at the center of the docu-series—IDA is hoping the public takes action to protect wild animals such as TOM III from being exploited for entertainment. Concerned citizens are encouraged to send an email to Rudd through IDA’s platform to encourage U of M to keep TOM III off the football field.

15 Vegan Recipes Perfect to Make for Your Next Tea Party or Picnic!