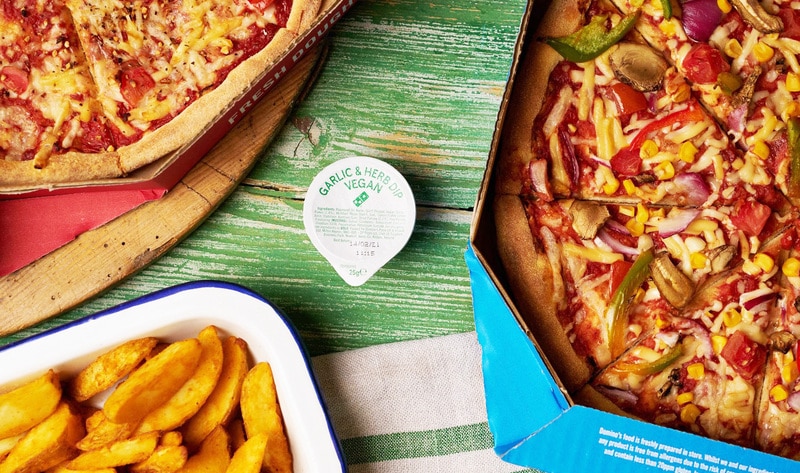 This week, international pizza chain Domino’s added two vegan pizzas to its locations across the United Kingdom and Ireland. In June, Domino’s tested the vegan pizzas at 46 locations and after a successful trial, has rolled out the options to all of its 1,200 outlets in the region. The chain spent one year developing the new options, which include the Vegan Vegi Supreme (topped with mushroom, corn, onions, red peppers, and tomatoes); and Vegan Margherita (topped with a vegan cheese developed in-house by Domino’s). The pizzas are made on a new hand-stretched vegan dough and can be customized with a variety of vegetable toppings. In addition to the pizzas, Domino’s created a vegan version of its popular Garlic & Herb dip which it formulated with pea protein instead of dairy milk and eggs.

“Domino’s may not be the first [to offer vegan pizza], but following fantastic feedback from our recent trial, we’re confident ours tastes the best. Our pizza chefs have been tucked away in test kitchens perfecting the recipe to ensure our vegan-friendly range recreates the unique magic of Domino’s famous original dough,” a Domino’s spokesperson said. “Of course, nothing says Domino’s like our Garlic & Herb dip, so we’re proud to have perfected a worthy equivalent of the legendary pot so our vegan fans can also dunk or drizzle to their hearts’ content.”

In addition to the UK, Domino’s has added vegan pizza options in other regions, including Australia where it offers Follow Your Heart cheese and vegan beef specially developed for the chain by a local company. Stateside, Domino’s US CEO Richard Alllison revealed in January that it is in the process of internally testing plant-based protein toppings.

The Healthiest Grains to Include in Your Diet