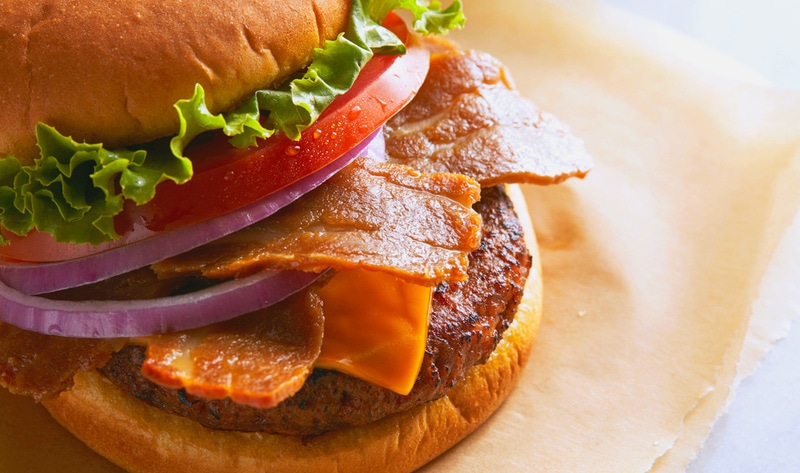 On September 18, the University of Massachusetts (UMass) will serve a vegan bacon cheeseburger at its Amherst dining hall in celebration of National Cheeseburger Day. The event will feature the Plant-Based (PB) Triple Play—the first vegan bacon cheeseburger available to food service providers—which will be available for takeout, delivery, and on a food truck. The PB Triple Play features an Awesome Burger vegan patty, soy-based Bac’n, and American-style Cheeze slices, all made by vegetarian brand Sweet Earth Foods—which was acquired by food giant Nestlé in 2017. After the National Cheeseburger Day event, the dish will become a permanent menu item at UMass next fall.

“We take pride in innovating in food and beverage with strategic partners like Nestlé Professional,” Ken Toong, Executive Director of Auxiliary Enterprises at UMass, said. “We are the first university in the USA to offer Sweet Earth plant-based bacon and cheese on our burgers and it’s a great fit for our students who are demanding craveable dishes with better ingredients yet zero compromise to taste.”

In addition to UMass, Nestlé plans to expand the PB Triple Play to additional college campuses and restaurants in the coming months. “What better way to celebrate National Cheeseburger Day than with a new take on this iconic dish that is good for people and the planet?” Nestlé CEO Mark Schneider said. “Nestlé is excited to partner with UMass to bring our PB Triple Play to students looking for a delicious plant-based option.”