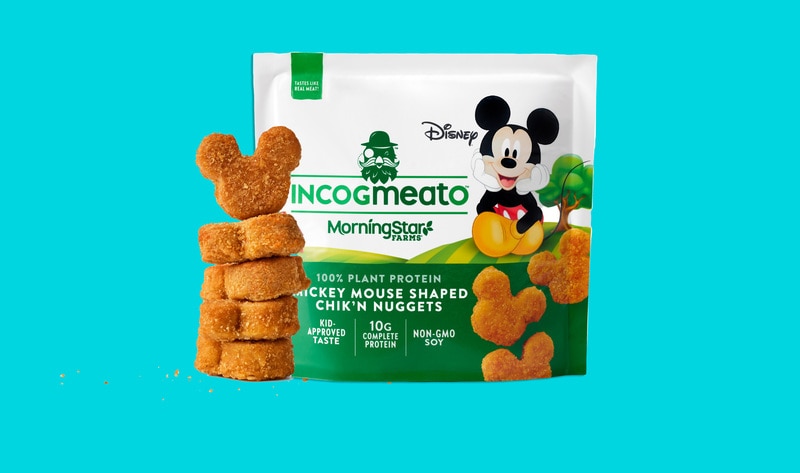 This week, Kellogg Company launched Mickey Mouse-shaped vegan chicken nuggets at retailers nationwide under its MorningStar Farms brand. The non-GMO soy-based nuggets are made in partnership with Disney and are the newest addition to MorningStar’s Incogmeato line—which the brand launched in 2019 with three products (plant-based burger patties, chik’n nuggets, and chik’n tenders) before expanding with two flavors of soy-based vegan sausages early this year.

“We saw a craving for more family friendly plant-based options and as a mom myself I knew we had a big opportunity with Incogmeato,” Sara Young, General Manager, Plant-Based Proteins at Kellogg Company, said. “We are so delighted to be working with Disney to help land plant-based proteins on the plates of kids nationwide.”

The new vegan nuggets (sold in the frozen section for a suggested retail price of $6.99 per 13.5-ounce bag) contain 57-percent less fat and 35-percent less sodium than animal-based nuggets. “Disney is committed to offering more plant-based foods, we are excited to be working with Incogmeato on the first-ever plant-based Mickey Mouse shaped nuggets,” said John T. King, Vice President of Consumables Licensing at Disney. “By creating foods that kids love and with the nutrition parents can feel good about, families can experience the magic of Disney during meal time.”

Outside of retail, Disney has expanded its plant-based offerings across its properties, including last year’s launch of 400 new plant-based dishes at its resorts in Florida and California.

Why You Shouldn’t Support Joe Exotic, the Star of Tiger King