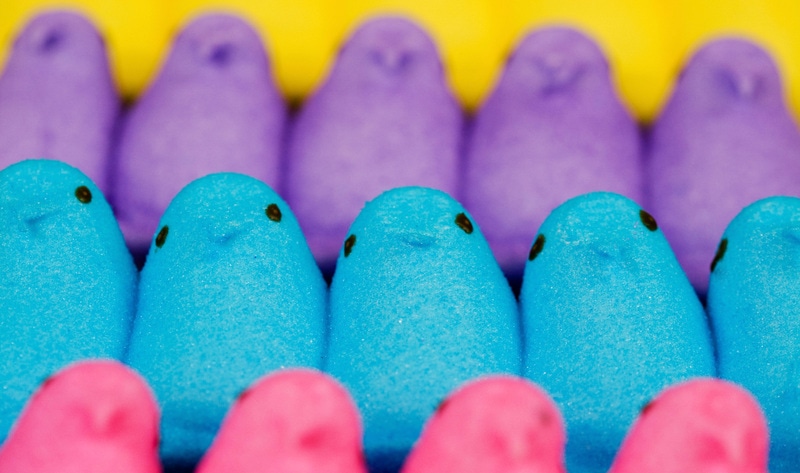 This week, vegan actor James Cromwell—who played farmer Arthur Hoggett in the ‘90s film Babe—sent a letter to David L. Yale, president of Just Born Quality Confections, urging him to veganize iconic Easter candy Peeps. Cromwell became a vegetarian in 1975 and vegan in 1995 on the set of Babe due in part to the film’s portrayal of animal characters. This year, the Peeps production cycle has been disrupted due to the COVID-19 pandemic which means that specialty Peeps will not be produced for Halloween, Christmas, or Valentine’s Day—downtime which Cromwell hopes the company will use to reformulate its candy without gelatin, which is typically derived from the connective tissue of pigs and other animals.

“The world is in turmoil, and we’re facing many pressing concerns, but we can’t allow our small pleasures to disappear. People around the world enjoy Peeps, so I hope that production of this iconic treat will continue—with one important caveat: that it be made without gelatin,” Cromwell wrote. “I had the privilege and pleasure of learning a lot about pigs when I starred in the movie Babe. They possess a remarkable capacity for love, joy, and sorrow … Replacing gelatin from pigs with vegan gelatin would allow the company to honor its past while moving forward into the future.”

Cromwell has been a longtime animal advocate and works with a variety of organizations to promote veganism, including People for the Ethical Treatment of Animals and Mercy For Animals.

Petition: Nominee for Department of Fish and Wildlife Services Director Has Worked for Anti-Animal and Environmental Groups