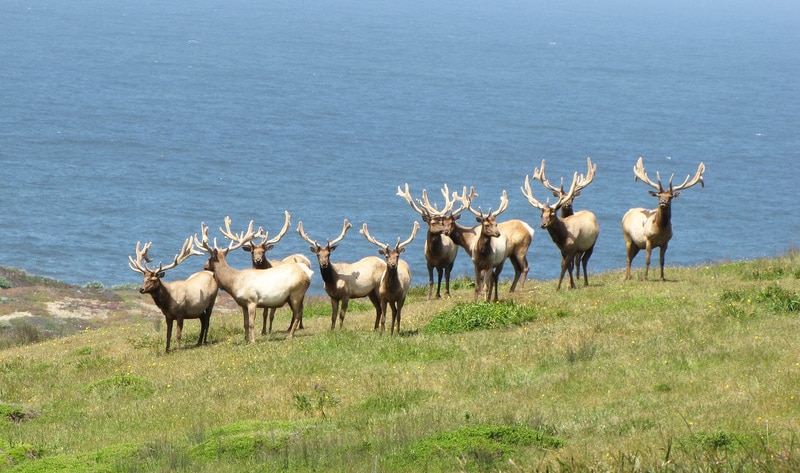 Approximately 50 local activists in California recently held a demonstration that included dramatic artwork at Point Reyes National Seashore in an effort to free trapped Tule elk dying from drought conditions. The demonstration occurred because 445 elk—the world’s largest remaining herd of the rare native animals—are currently trapped and dying behind an eight-foot fence that separates the elk from leased dairy and meat farms. The area where the elk live is suffering drought conditions and the elk are unable to roam free to obtain water elsewhere. According to animal protection organization In Defense of Animals (IDA), which was involved in the demonstration along with other groups, the National Park Service (NPS)—which erected and maintains the fence to appease cattle ranchers with grazing leases in the park—refuses to implement a contingency plan to provide water to the elk. In 2013 and 2014, similar conditions left more than 250 elk dead. So far this season, six elk have been found dead. Local animal activists recently stepped in to supply emergency water to the Tule elk by installing two troughs holding a total of 150 gallons of water.

“The growing number of dead Tule elk has many local people extremely concerned,“ IDA Director of Communications Fleur Dawes said. “As locals hear what’s happening to the elk at the Seashore, more and more people want to take part and stop a repeat of the mass deaths and address the ranching problem.”

Concerned citizens are urged to find out how to help the Tule elk at www.idausa.org/elk.

You Can Now Get a Vegan “Discovery Box” Stuffed With Pizza, Dumplings, Burritos, and Lasagna