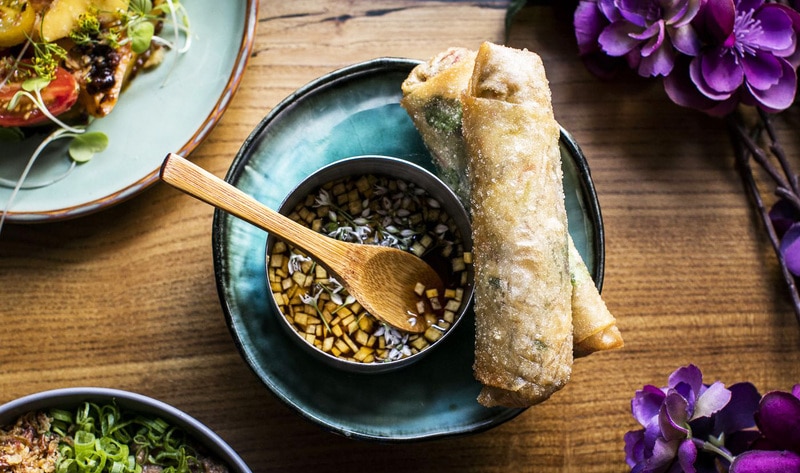 New vegan Filipino restaurant Saramsam opened this month in the East Village neighborhood of New York City. The new eatery serves traditional Filipino dishes reimagined to be fully vegan by head chef Raj Abat. “I was extremely hesitant to do Filipino food—the food I grew up with,” Abat said. “How do I replicate all the funky flavors? Our cooking uses fermented fish and shrimp, so I had to recreate those flavors by fermenting beans, stinky tofu, and miso.” The menu features a variety of dishes including lumpia, mushroom-based adobo, sisig, and halo halo for dessert, along with beverages such as orange wines, cocktails, and Filipino beers. The restaurant also offers a tasting menu for $50 per person served communal style on banana leaves.

Operated by vegan restaurateur Ravi DeRossi, Saramsam opened in the space of vegan Indian eatery Night Music, a concept also opened by DeRossi in 2019 where Abat served as head chef. In 2016, DeRossi vowed to transition as many of his then 15 restaurant holdings to be completely vegan to align with his own lifestyle. Since, the restaurateur has removed animal products from his older restaurants Ladybird and Mother of Pearl, and opened new vegan eateries such as Avant Garden, Fire & Water, Honeybee’s, and Dollface. Through his newly renamed Overthrow Hospitality restaurant group, DeRossi plans to continue his mission, starting with Saramsam. Planned future restaurant openings include Mexican-inspired Spider in the Garden, soul food eatery Cadence, and pasta-and-wine bar Soda Club—all of which will be operated by senior employees within DeRossi’s Overthrow Hospitality group.

The Truth About Craigslist’s ‘Free’ Animals