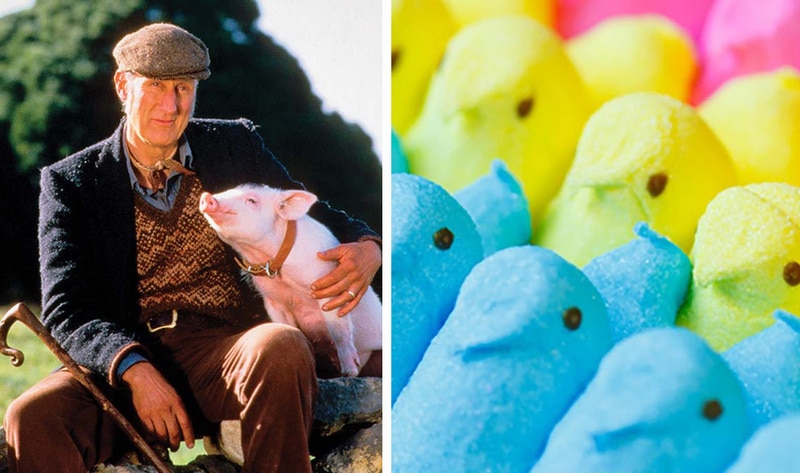 Candy brand Peeps is open to going vegan but has not found a suitable plant-based substitute for gelatin, according to David Yale—president of parent company Just Born Quality Confections. After learning that Peeps will not be releasing holiday versions of its marshmallow candies this year due to the COVID-19 pandemic, vegan actor James Cromwell—who played farmer Arthur Hoggett in the ‘90s film Babe—sent a letter to Yale urging him to use the downtime to remove gelatin from the iconic Easter candy. Yale responded to Cromwell’s letter, revealing that the company is unable to find a vegan alternative to gelatin.

After receiving Yale’s response, Cromwell penned a second letter to continue the conversation. “People are more informed than ever before about the ingredients in their food, and children—as well as kind adults—are horrified when they find out that their favorite bright and happy Peeps involve harming their animal friends,” Cromwell wrote. “The market for vegan ingredients is rapidly expanding, and fantastic vegan gelatin is already available … and it would be in your company’s best interests—since today’s consumers are increasingly demanding animal-friendly vegan options.”

In 2018, PURIS—North America’s largest producer of pea protein—debuted a vegan alternative to gelatin for gummy candies made from pea starch. Silicon Valley-based startup Geltor is also developing vegan proteins to replace collagen in cosmetics as well as gelatin in food products and raised $93.1 million in July to support its mission.

15 Vegan Blueberry Desserts that Will Shine at Your Fourth of July Celebration!

12 Hearty Plant-Based Stews to Keep you Warm All Season Long!