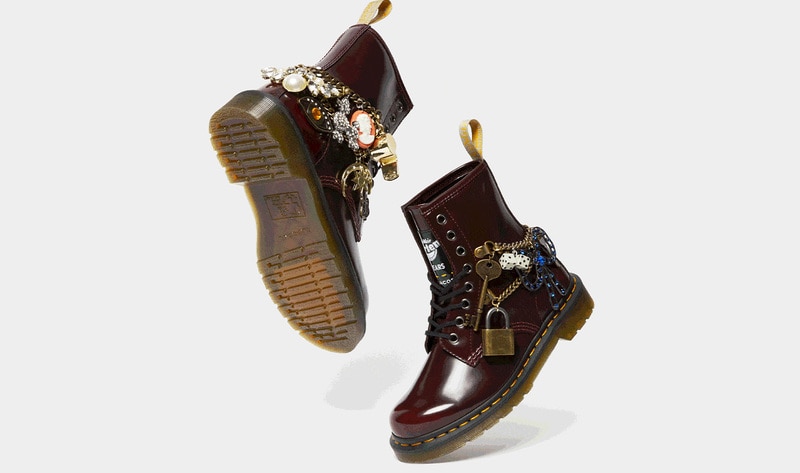 On September 26, shoe brand Dr. Martens released a limited-edition vegan boot made in collaboration with legendary designer Marc Jacobs—which promptly sold out within minutes of launch. The cherry red boots are a reimagination of Dr. Martens’ classic 1460 style that Jacobs embellished with gold chains filled with trinkets, whistles, and charms to invoke a glam-punk style. “Marc Jacobs has always done whatever the hell he’s wanted,” Dr. Martens’ described the collaboration. “Brilliantly unpredictable and known for his unique and outspoken perspective on everything from fashion to societal expectations—his legacy is nothing short of legendary. And there’s no exception with this unique collaboration. They’re wound around a completely vegan upper—another uncompromising statement from Jacobs—and complete with dual-branded tongue label and swing tag, yellow welt stitching, and a vegan heel loop.”

The boot (which cost $268 per pair) generated so much buzz that customers reported that the Dr. Martens’ website crashed, with the boots selling out within a mere six minutes in Germany. While the company is not planning to restock the limited-edition Marc Jacobs boots, the collaboration is part of Dr. Martens’ 60th anniversary collaboration celebration in which the shoe brand will partner with 12 different designers to remaster its 1460 style (which it produces in both vegan and non-vegan options). Dr. Martens will release a new limited-edition style every month and is limiting production to 1,460 pairs of boots.

In the first quarter of 2019, Dr. Martens CEO Kenny Wilson revealed that the company’s sales had increased by 70 percent due in large part to its vegan line.