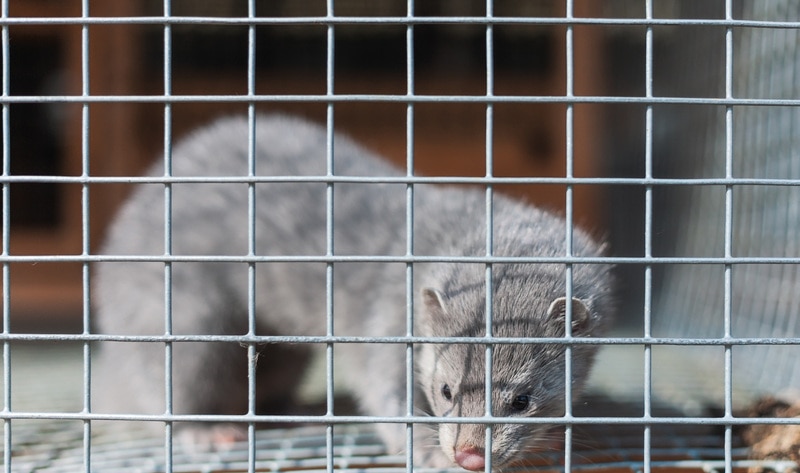 This week, French Minister of Ecological Transition Barbara Pompili announced that the country will close its remaining four mink fur farms by 2025. The announcement comes a month after animal-rights group One Voice released an undercover investigation of the suffering minks experience of fur farms in France. After the investigation, One Voice submitted an official police complaint to shut down the remaining mink fur farms in France—a complaint supported by animal-rights group Humane Society International (HSI) United Kingdom and other members of the Fur Free Alliance, a more than 50-member coalition working to ban fur farming worldwide.

“We applaud the French government for taking a stand against the immense suffering endured by mink for fur fashion,” Claire Bass, Executive Director of Humane Society International (HSI)/United Kingdom, said. “The scenes of abject suffering in France’s last remaining fur farms made the world shudder, so it is commendable that minister Barbara Pompili has listened to the public outcry that this kind of cruelty is utterly unacceptable.”

According to market research data, 77 percent of French citizens are opposed to exploiting animals for their fur and more than half a million signed a referendum that includes a ban on fur farming. “This announcement is a great first step for France, but it allows for the unnecessary suffering of mink to continue for another five years,” Bass said. “It also excludes Orylag rabbits who are farmed for their fur in France.  We would like to see the French government shut down all mink fur as a matter of urgency and for them to acknowledge that rabbit farming is next on the list.”

France is the second largest importer of fur to the UK—which banned fur farming on its soil in 2003 but has imported $82,862,389 worth of fur from France from 2015 to 2019. “The UK banned fur farming [more than] a decade ago, but we still allow the import and sale of fur from countries like France,” Bass said. “For as long as the UK remains open for business to sell fur from overseas, we are complicit in this cruelty. We call on the UK to close the door on fur sales and become a #FurFreeBritain.”

After the virus that leads to COVID-19 was detected at approximately 41 of 120 mink fur farms in the Netherlands, the country voted to shut down its remaining mink farms by March 2021—two-and-a-half years ahead of schedule of a mink fur ban it previously enacted.

From Sweet Chili Tofu to Sausage Pesto Pasta Bake: Our Top 10 Recipes of the Day!