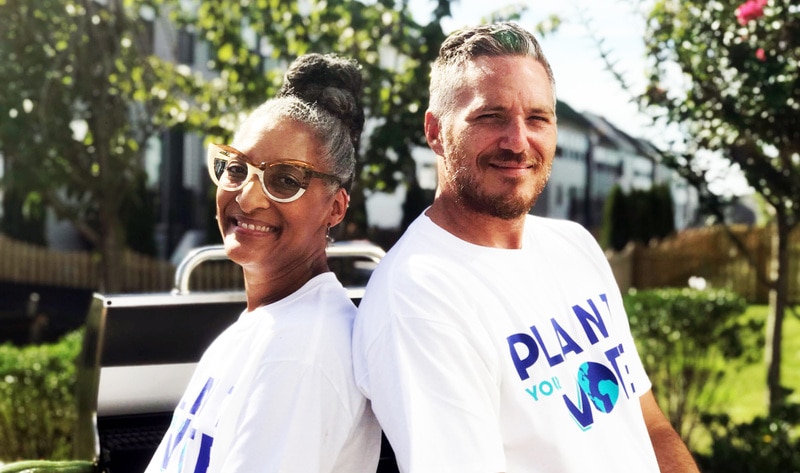 This month, chefs Spike Mendelsohn and Carla Hall—both alums of Bravo’s cooking reality show Top Chef—launched “Plant Your Vote,” a social media campaign that encourages Americans to share plant-based recipes while inspiring them to register to vote in the upcoming election on November 3. The campaign will work with popular chefs Rachel Ray, José Andrés, and Michael Voltaggio to promote its mission and welcomes chefs of all levels to participate in spreading its message.

“As chefs, we have a responsibility to serve our community that goes far beyond the kitchen,” Mendelsohn said. “I created the Plant Your Vote Challenge because I knew I wasn’t doing enough to support the changes our country so desperately needs right now. Carla and I hope that by engaging our fellow chefs, influencers, and friends in this fun and inclusive challenge, more people will be inspired to plant their vote and use their voice to create a better tomorrow.”

To participate, Americans are encouraged to share a photo or video of their plant-based recipe on social media, tag @plantyourvote, and insert the link plantyourvote.com—which directs to the campaign’s website where users can register to vote and learn more about the challenge.

“When Spike asked me to join him in the Plant Your Vote challenge, I didn’t think twice about it.  It was an immediate ‘yes,’” Hall said. “As chefs we are passionate about feeding people, and we are also deeply aware of where our food comes from, how it’s sourced, and what it takes to keep the earth healthy enough to produce it. Reminding people in a fun and delicious way that we are also voting about food issues is a great idea. I hope we inspire people to keep this challenge going.”

In September 2019, Mendelsohn opened his first location of vegan fast-casual eatery PLNT Burger inside Whole Foods Market in Silver Spring, MD where he serves a variety of Beyond Burgers topped with Follow Your Heart’s vegan cheese, mushroom-bacon, and guacamole, alongside Beyond Meat-based chili, Beyond Sausage-stuffed hot dogs, and vegan chicken sandwiches made with crispy oyster mushrooms. Currently, the acclaimed chef operates five PLNT Burger locations in the Northeast.