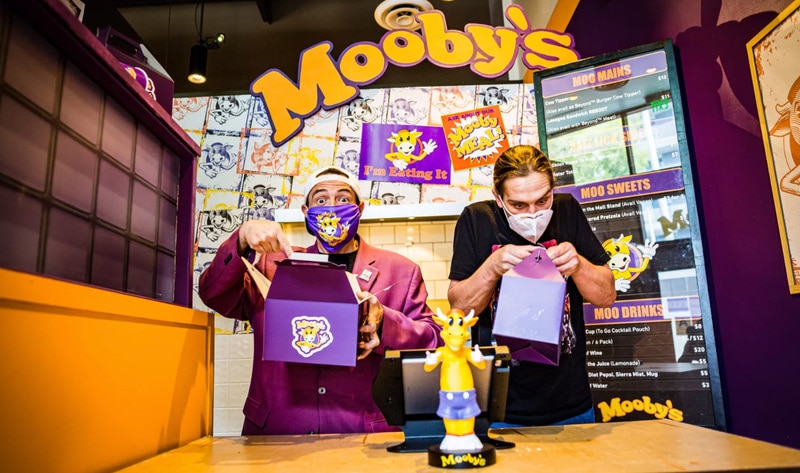 Vegan director Kevin Smith will soon bring Mooby’s—a once fictitious restaurant that’s now a real-life, vegan-friendly pop-up—to Chicago. Smith first introduced Mooby’s in his film Dogma and it later made appearances in his other movies such as Clerks II and Jay and Silent Bob. In April, Smith brought the restaurant to life as a delivery-only pop-up in Los Angeles where it served Cowtipper burgers, hater totz, and lasagna sandwiches—with extensive vegan options. Last month, Smith expanded the concept to his hometown of Red Bank, NJ, where eased COVID-19 restrictions made it possible for Mooby’s to host a limited in-person experience at Gianni’s Pizzeria. In Chicago, fans can expect a week-long pop-up at a local eatery (the location of which will be disclosed next week) with an appearance by Smith—who will be in town on November 1 recording podcast event “Jay and Silent Bob Get Old” with co-star Jason Mewes.

MOOBY’S MIDWEST! @jayandsilentbobstash are bringing their @moobyspopup to SWEET HOME CHICAGO! After the udder successes of the Mooby’s in L.A. and the @giannispizzeria Mooby’s in New Jersey, the fast-food-foisting Golden Calf will take over a local Chicago eatery for one week, bringing a little piece of Jersey to Illinois! And for the first time in a year, @jaymewes and I return to the Windy City – for both the Mooby’s Grand Opening and for a live recording of JAY & SILENT BOB GET OLD at the McHenry Outdoor Theater on November 1st! The exact location and the dates of Chicago Mooby’s get announced next week, so join the mailing list right now at MoobysPopUp.Com (at the link in my bio)! #KevinSmith #moobys #moobyspopup (Amazing Art by @thedarknatereturns!)

With the help of his vegan daughter, actress Harley Quinn Smith, the acclaimed director went vegan in 2018 after surviving a “widow-maker” heart attack. Since, Smith has been an avid proponent of veganism and once paid a fan $200 to help him procure vegan food from his favorite eatery Veggie Grill during a layover at Chicago’s O’Hare International Airport.