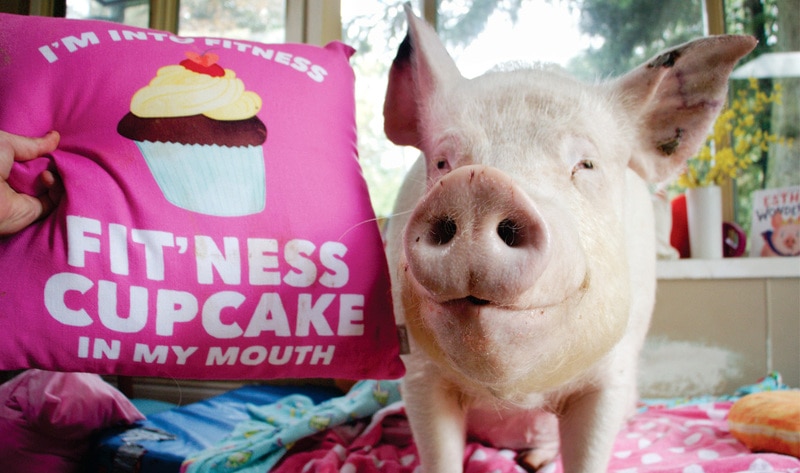 On October 13, the Esther the Wonder Pig Vegan Cupcake will be available for nationwide shipping through Indiana-based bakery Cute as a Cupcake. The vegan vanilla cupcake comes topped with sprinkles and will be packed in 8-ounce jars, a 4-pack of which will be available for $34 plus shipping and taxes. The cupcake was created in partnership with Country Crock and Esther the Wonder Pig—a loveable, 650-pound pig who helped her adoptive dads, Derek Walter and Steven Jenkins, go vegan. Country Crock will cover the cost of the first 100 Esther the Wonder Pig Vegan Cupcake orders placed online and will then match the cost of each limited-edition cupcake batch purchased with a donation of up to $20,000 to support animal sanctuary partners Woodstock Sanctuary and Happily Ever Esther Farm Sanctuary—which Walter and Jenkins opened in Ontario in 2014 with the aim of rescuing other farmed animals and spreading the vegan message.

We teamed up with @antoni to surprise @EsthertheWonderPig and her dads with some delicious vegan Country Crock® Plant Butter cupcakes. Click the link in bio to watch the big reveal! 🐷🧁

Known for its margarine, Country Crock debuted its vegan butter line in 2019 at retailers nationwide. To promote its launch, the food company partnered with Antoni Porowski—the food and wine expert on reality show Queer Eye. As part of the current cupcake campaign, Porowski visited Esther and her dads at her sanctuary in Canada where the celebrity chef prepared cupcakes for the famous pig. “What’s so cool about Country Crock Plant Butter is that it’s easy for people to make one little swap in order to be plant-based,” Porowski said. During the visit, Esther’s dads explained to Porowski that creating one pound of butter requires 21 pounds of milk. “Wow,” Porowski said. “It’s really easy to make one small change and that snowballs into a lifestyle choice.”

15 Recipes Featuring the Decadence of Dark Chocolate and Health Benefits of Avocado!