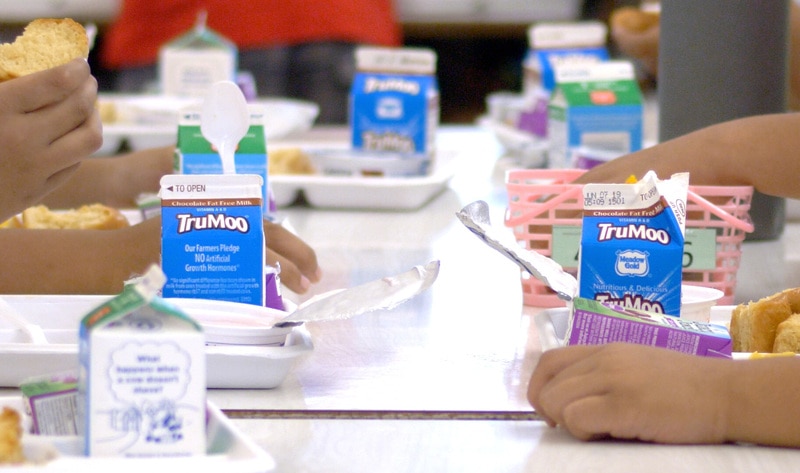 This week, animal-rights group Animal Outlook released harrowing footage of an undercover investigation it conducted at dairy farm Dick Van Dam Dairy. At the California farm—which Animal Outlook connected to Dean Foods, a dairy company that recently filed for bankruptcy— investigator Erin Wing found workers hitting cows in the face, legs, and udders with splintered wooden sticks and metal pipes; kicking them in the face; and twisting their tails so hard that they broke bones, among other abuses. When it came to calves, Wing found widespread abuse and neglect, and documented newborns who required medical care being left to die in pens alongside their mothers. The injuries that some mother cows suffered resulted in pink-hued milk from blood and pus in their udders. Workers at the farm routinely used “hip clamps” to lift downed cows and then left them in the dirt to die. Wing documented squalid conditions with cows hobbling on feces-covered, slick floors who were forced to be milked despite their injuries.

The dairy farm is a supplier to Dairy Farmers of America which produces milk Dairy Pure—sold at Target stores nationwide—and TruMoo brand milks. Animal Outlook gathered evidence that raises the possibility that slaughtered cows from this facility end up in the National School Lunch Program through American Beef Packers (ABP). Additionally, TruMoo is a brand that was developed specifically for school lunches.

Following the release of Animal Outlook’s investigation, advocacy group Animal Legal Defense Fund (ALDF), together with California law group Talkov Law Corp, filed a lawsuit in the California Superior Court for Riverside County, demanding that Dick Van Dam Dairy is shut down and its owners be barred from working with animals ever again. The group also partnered with actress Kate Mara to produce a short video [warning: graphic scenes] to share the abuses found on the farm with the public.

“The abuse and neglect towards cows and calves exposed through the investigation demonstrate this is not just a single employee or incident, but company-wide practices condoned by management,” ALDF Executive Director Stephen Wells said. “Undercover investigations are one of the only ways to expose the cruelty imposed by the industrial animal agriculture industry. The industry wants to keep the truth hidden, because they know the public would not tolerate the conditions animals endure.”