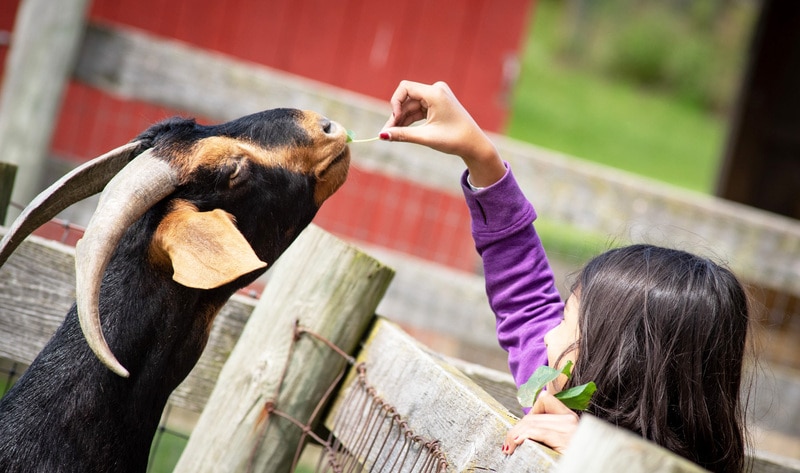 A new study found that interacting with rescued animals at sanctuaries encourages visitors to reduce their consumption of animal products. The study was carried out by research firm Faunalytics with 1,200 participants between July and September 2019 at Farm Sanctuary’s California and New York locations. Researchers found that while 53 percent of non-vegan participants indicated they intended to change their diet prior to visiting the sanctuary, 70 percent reported a desire for changing their diet—namely, reducing their consumption of animal products—after their visit. Researchers followed up with participants after two months and found that non-vegans reported they had indeed reduced their consumption of animal products, many attributing the change to their interactions with Farm Sanctuary’s rescued animals.

“Now more than ever the public is aware of the immense suffering that farmed animals experience in the food system. As advocates use this moment to encourage a global shift toward veganism, it’s important to think about effective ways to generate change,” Tom Beggs, Faunalytics’ Research Scientist and the lead author of the study, said. “The results from our study confirm something that most farm animal sanctuaries are already aware of: having meaningful interactions with farm animals encourages people to empathize with them, and more importantly, to consider them as sentient individuals and not food.”

Researchers further found that participants’ views on other aspects of animal agriculture had changed after interacting with animals at Farm Sanctuary. While 52 percent of participants indicated that they strongly believe people contribute directly to farm animal suffering by eating animal products, after taking the tour, that number increased to 69 percent. The percentage of omnivores who said they would cook vegetarian or vegan meals increased from 66 percent pre-tour to 78 percent post-tour. Additionally, while only 48 percent of participants indicated pre-tour that they planned to discuss veganism and vegetarianism with others, at the two-month follow-up, 73 percent (of which 64 percent were omnivores) reported having these conversations with their friends and family.

“Industrialized animal agriculture is at the core of some of the biggest threats facing our world today—including global pandemics, climate change, animal cruelty, and economic injustice—and the critical role that farm sanctuaries play in modeling a compassionate relationship with animals and inspiring positive lifestyle change cannot be overstated,” Farm Sanctuary’s Chief Executive Officer Megan Watkins said. “Whether you visit in-person or virtually, the best way to glimpse the future is to visit a farm sanctuary.”

New Legislation Seeks to Ban Bacon from Hospitals in Oregon