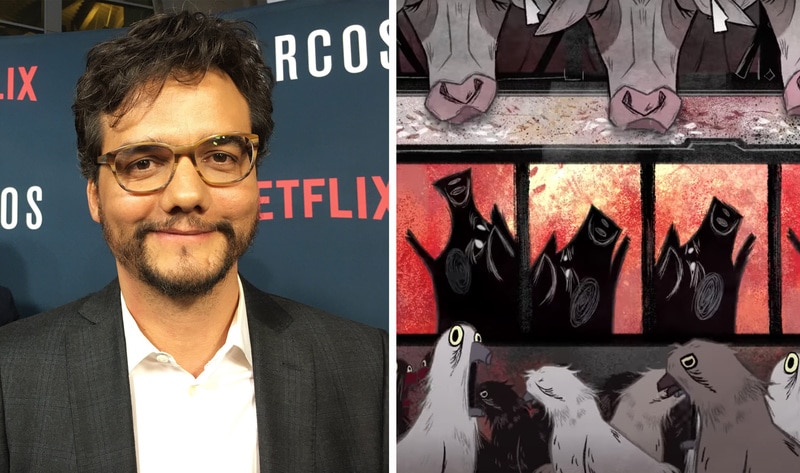 A new short film “There’s a Monster in My Kitchen”—which is narrated by Narcos star Wagner Moura (who plays Pablo Escobar)—will be played on social media channels and in movie theaters globally. Created by environmental organization Greenpeace and creative agency Mother, the film depicts a young boy looking for a midnight snack of fried chicken inside of a refrigerator who is confronted by a “monster” jaguar, who moves about the kitchen knocking down meat stew, throwing animal bones around from a barbecue, and tearing down a chalkboard with a shopping list full of animal products. The film then flips the script to highlight the destruction of the jaguar’s home in the Amazon forest for the sake of producing the animal products found in the boy’s kitchen —showing that the real monster is animal agriculture.

“Our relentless desire for meat on ever-increasing industrial scales is having lasting consequences for the health of our planet and ourselves,” John Sauven, executive director of Greenpeace, United Kingdom, said. “Everyone can make a difference. But it is the retailers and suppliers of meat who can have the most dramatic impact by cleaning up their supply chains.”

The short film concludes with a poignant message of swapping animal protein for plant-based foods such as vegetables and tofu and encourages viewers to protest the meat-driven destruction of the Amazon. “The impact of industrial meat production in South America is so vast and challenging, to visualise that we chose to bring it to life through a human story, which makes the issue more relevant to our audience’s lives and offers them tangible action for positive change,” Ana Balarin, partner at Mother, said.

The video is part of a larger Greenpeace campaign to end the destruction of South America’s forests.