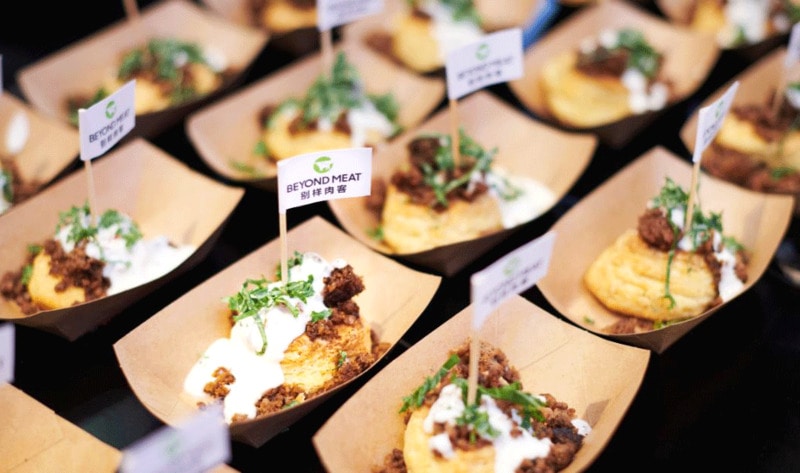 This week, California-based vegan brand Beyond Meat unveiled a new product, Beyond Pork, which is made specifically for Chinese consumers. The ground vegan pork was created to be used as a filling in dumplings and spring rolls, as well as in dishes such as ramen, meat gravy, and pasta bolognese. Beyond Pork is now being served at five Shanghai restaurants for a limited time. “We’re excited to launch Beyond Pork in China, marking a milestone for Beyond Meat,” Candy Chan, Beyond Meat’s general manager for China, said in a statement. “We are not only launching an entirely new product innovation, but our first plant-based meat product created specifically for the Chinese market.”

In September, Beyond Meat announced that it is building two production facilities in China’s eastern province of Zhejiang to manufacture its plant-based meat products, including vegan beef, pork, and chicken, for the Chinese market. Beyond Meat is the first multinational plant-based meat brand to bring its own major production facility to the country, and it’s expected to be one of the company’s biggest markets for both production and research and development in the near future. Trial production is scheduled to commence within months with full-scale production to start in early 2021.

While Beyond Pork is the first Beyond Meat product crafted specifically for the Chinese market, the company’s other products, including its Beyond Burger, are available on menus across China. In April, Beyond Meat entered the Chinese foodservice market by way of 4,200 Starbucks locations, which now offer menu items made with Beyond Beef, followed by select locations of Pizza Hut, Taco Bell, and KFC, which added the Beyond Burger to their menus in China for a limited time.

Stateside, Beyond Meat grew its foodservice footprint with its Pizza Hut partnership earlier this month, which places its vegan sausage topping at all traditional locations of the chain nationwide, along with participating Pizza Hut Express outposts—marking the first time a national pizza chain has offered vegan meat toppings.

Why You Need to Stop Buying Farm Animals Like Chickens, Ducks, Pigs, Rabbits and Goats as Pets