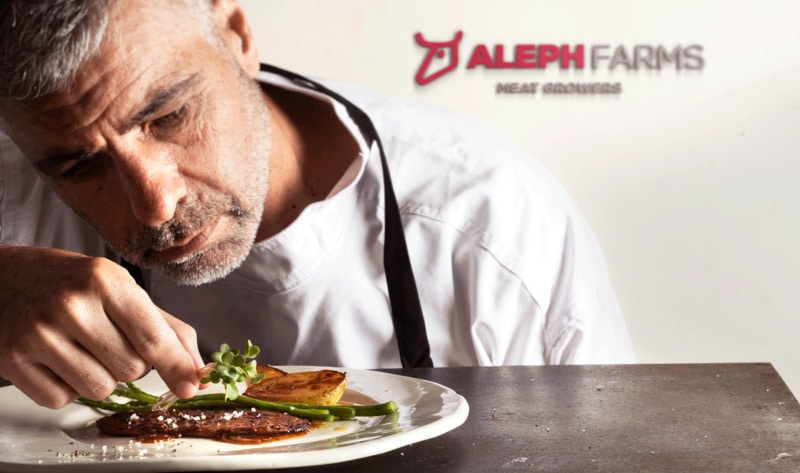 This week, Israel-based food technology startup Aleph Farms announced a pivotal step in getting cell-based meat to market. The startup has now moved its prototype for cell-based steak—grown from a small amount of animal cells around a plant-based matrix to cultivate 3D meat structures outside of the cow—to a platform that will scale production with the goal of bringing the slaughter-free meat to the public. Aleph Farms first unveiled its cell-based steak in 2018 and has since increased its size and adapted it to be viable for large-scale production. The startup also developed five modules in its mass production platform to help bring the novel meat to market at cost parity with its traditional counterpart. Aleph Farms is currently transferring its commercial product to its first BioFarm, a pilot production plant with a launch planned for 2022.

“One of the big challenges of cultivated meat is the ability to produce large quantities efficiently  at a cost that can compete with conventional meat industry pricing, without compromising on quality,” Aleph Farms Co-Founder and CEO Didier Toubia said. “We have developed five technological building blocks unique to Aleph Farms that are put into a large-scale production process, all patented by the company.”

The process Aleph Farms uses mimics the natural environment in which cow cells proliferate to create different parts of the animal that uses far fewer resources than industrial animal agriculture. The end result is a steak that provides the same sensory experience as beef but without the need to slaughter animals. “It’s not enough to just make a protein that will fill the nutritional gap; we need to capture the fullness of the meat-eating experience,” Toubia said. “Meat can be cultivated from cells isolated from different animal breeds, have different cuts, and it elicits different emotions. We see Aleph Farms as crafters of experiences.”

On November 20, Aleph Farms will unveil its newest commercial prototype at the Asia-Pacific Agri-Food Innovation Summit in Singapore as part of a virtual cooking demonstration hosted by Aleph Farms’ resident chef Amir Ilan. “Aleph Farms is establishing a new category of meat, imbued with its own culture and a new world of meaty experiences,” Ilan said.

Earlier this month, fellow Israeli startup SuperMeat opened The Chicken, the world’s first cell-based meat “restaurant.” The concept allows for visitors to sample dishes made with SuperMeat’s cell-based chicken in a traditional restaurant while providing feedback to the startup, which plans to launch its cell-based meat in restaurants within one to two years and ramp-up production with commercial-scale plants in five years.

Petition: End Festival in Spain that Forces Horses to Ride Through Fire