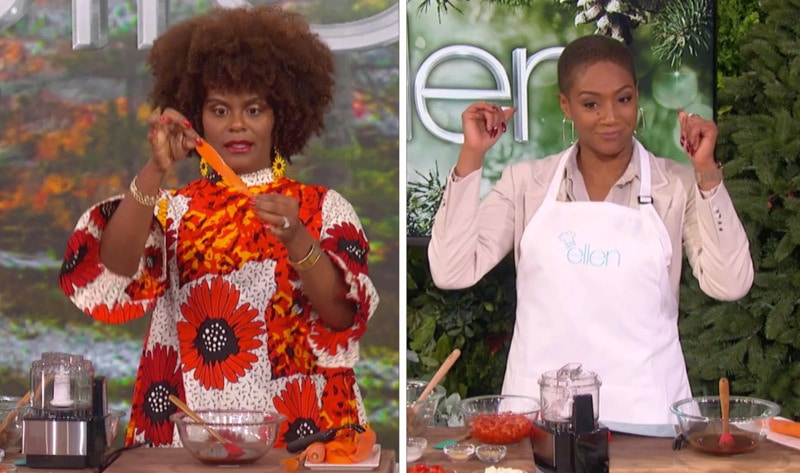 Today, vegan influencer Tabitha Brown appeared on a cooking segment of Ellen DeGeneres’ show Ellen. On the segment, Brown helped actress Tiffany Haddish prepare several of her recipes, including vegan meatballs (spiked with maple syrup) and her carrot bacon recipe which went viral on social media platform TikTok earlier this year. The duo chatted about working together on various projects—they both appeared in the 2018 film All Between Us—and Brown’s decision to go vegan. “Three years ago, I got on the vegan train,” Brown shared. “And it saved my whole life.”

This fall, Brown has helped several celebrities prepare vegan meals, including Orange Is the New Black star Laverne Cox (who she helped cook air-fried okra and a one-skillet Beyond Sausage meal) and Steve Harvey (who she showed how to make vegan meatloaf on his web series Steve on Watch). This month, the first episode of Brown’s own show, All Love, debuted on the Ellen Digital Network, a digital media platform operated by Ellen Digital Ventures—a collaboration between DeGeneres and Warner Bros’ Digital Networks.