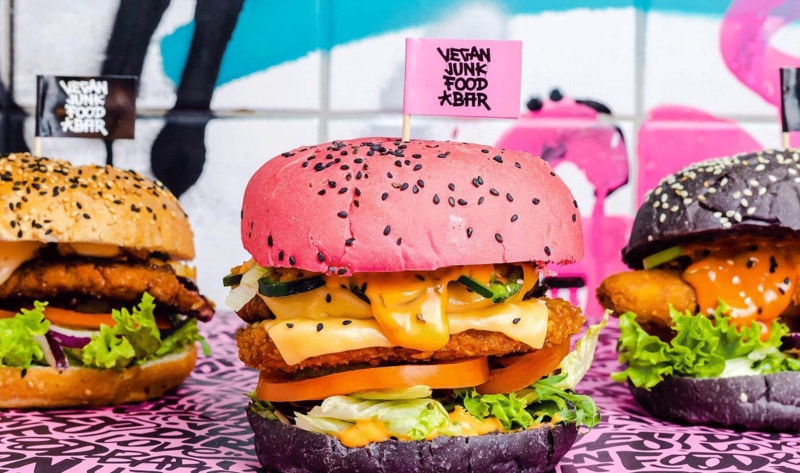 This month, Dutch chain Vegan Junk Food Bar (VJFB) opened its first international location in Barcelona, Spain. The new location is situated in the El Born neighborhood and offers the same colorful, quirky atmosphere as the chain’s locations in the Netherlands. The menu consists of creative sandwiches such as the Daddy Mc Chik’n (vegan chicken, bacon, veggies, and special “Daddy” sauce stuffed between pink- and blue-hued buns); loaded “freak” fries served with a variety of colorful toppings; a selection of vegan fish dishes, including sashimi, featuring Vegan ZeaStar (a brand collaboration between VJFB and consulting firm Vegan XL); along with a creative cocktail menu and branded merchandise. The Barcelona location will follow local Spanish regulations to operate safely during the COVID-19 pandemic.

VJFB opened its first location in Amsterdam in 2017 and has since grown to five locations in the Netherlands. In August, the business announced it is looking for franchising partners who have experience in the hospitality industry with a desire to develop between 10 and 100 VJFB locations in the coming years. The chain recently signed its first franchise agreement and will expand to additional locations within Spain, starting with Madrid, before embarking on a larger European expansion.

You Can Do What With Dates? 10 Decadent Date Desserts

From Burrito Bowl to Cream Slices: Our Top Eight Recipes of the Day!