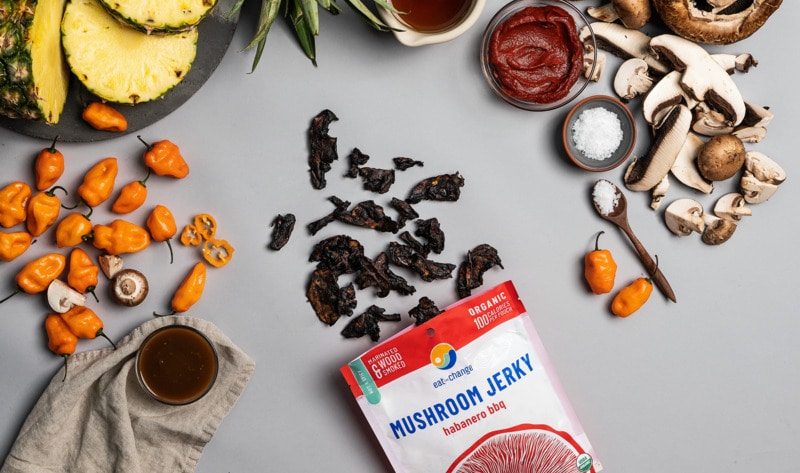 In January, Eat the Change Mushroom Jerky will launch in retailers across the country. Created by Seth Goldman, co-founder of Honest Tea and chairman of the board for vegan brand Beyond Meat, and Chef Spike Mendelsohn, renowned restaurateur behind the PLNT Burger chain and plant-based food advocate, Eat the Change aims to educate and empower consumers about climate change. Launching with five chef-crafted flavors—Sea Salt + Cracked Pepper, Hickory Smokehouse, Teriyaki Ginger, Maple Mustard, and Habanero BBQ—Eat the Change partners with a family farm in Kennett Square, PA to source its organic portobello and crimini mushrooms, including bruised, oversized and usually discarded stems. According to the company, mushrooms are one of the most sustainable crops grown in the US.

“We are thrilled to launch our first product line—chef-crafted mushroom jerky, in a tasty range of flavors—from tangy to spicy,” Goldman and Mendelsohn told VegNews. “Our goal at Eat the Change is to provide delicious, climate-friendly foods so we can empower consumers to align their diets with their hopes for a healthier and kinder planet.”

Eat the Change Mushroom Jerky is available through its website and will be sold through retailers, including independent natural food stores and supermarkets, across the country starting next month.