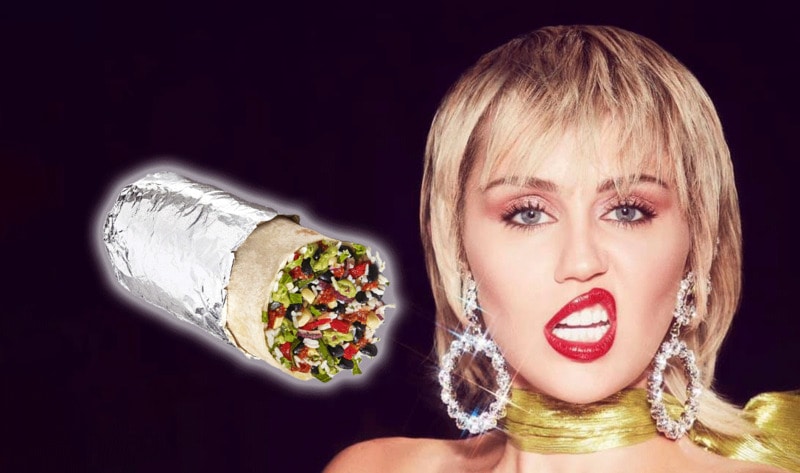 What’s in a name?
The singer has been known to comment on fans’ TikTok videos which has now turned into the “If Miley comments, I’ll do something” trend. Earlier this week, Chipotle participated in the TikTok trend, posting a video of a foil-wrapped burrito with the caption, “if Miley comments, we’ll make a Miley burrito in our app.” Sure enough, Cyrus commented with, “Only if you name it ‘the Guac is extra but so is Miley’ burrito.” Shortly thereafter, the chain added the vegan burrito—which costs $8.75, with no extra charge for the guacamole as it is included in the price—to its ordering app.

Is Miley Cyrus Vegan?
Cyrus first adopted a plant-based diet in 2014 after witnessing her dog Floyd being attacked and killed by a coyote. She has since adopted and cared for a number of animals—including Pig Pig, a pig who passed away in 2019. This fall during an episode of the “Joe Rogan Experience” podcast, Cyrus revealed that she started eating fish in 2019. In a subsequent phone interview, Cyrus explained that she is not sure if she will remain “un-vegan,” adding, “I think when you become the face of something, it’s just a lot of pressure. If I could learn to operate at 110 percent living a vegan lifestyle, that would be ideal … I just didn’t get there.”

15 Potato-Based Veggie Burgers That Will Satisfy Any Craving!