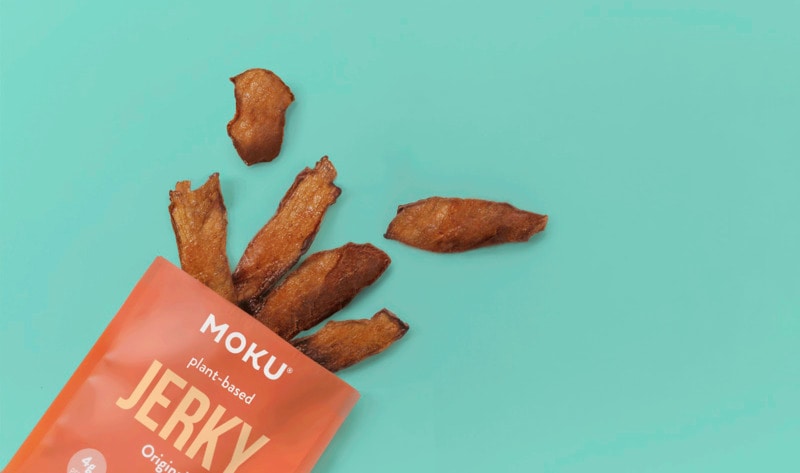 This month, new Hawaiian brand Moku launched with three flavors of vegan jerky: Original, Hawaiian Teriyaki, and Sweet & Spicy. The brand was developed by Oahu resident Matt Feldman, who, along with a number of other vegan entrepreneurs, was spotlighted in the recently released Forbes 30 under 30 list. “Raised on Oahu, Hawaii, an island with limited natural resources, I understood the importance of caring for the land or, malama ‘aina, as we say in Hawaiian,” Feldman said. “As I became older, I learned more about the immense carbon footprint caused by industrial factory farming, which led me to adopt a plant-based diet. I struggled to find an alternative to replace jerky, my go-to snack, that wasn’t filled with ingredients that sounded like they were made in a lab; so, I set out to create my own.”

In partnership with renowned plant-based chef Thomas Bowman, Feldman spent one year in his home kitchen developing vegan jerky which he makes using king oyster mushrooms, coconut aminos, chickpea miso, and maple syrup. Moku’s products are currently available through its website and will launch on Amazon Prime in January 2021.

Feldmand hopes that his flavor-forward jerky—which saves up to 12 square feet of land, 11 pounds of methane, and 107 gallons of water per bag compared to its beef-derived counterpart—is an eco-friendly choice many will make. “We’re not here just to make jerky. We’re here to encourage everyone to take mindful steps towards a healthier, sustainable future—from our snack choices to our day-to-day routines,” Feldman said. “Moku makes it easy to incorporate more plant-based foods into your diet; and small changes add up. Let’s take it one day at a time, one choice at a time.”

Vegan jerky boom
A number of new vegan jerky brands have launched in recent months, including Urban Cowboy (a brand created by a Texas native which recently launched at select Whole Foods in Texas and Louisiana); ELECTRIC Jerky (created by flavor scientists to trick the brain into thinking its soy-based protein is meat); and Eat the Change (created by Seth Goldman—co-founder of Honest Tea and chairman of the board for vegan brand Beyond Meat—and Top Chef alum Spike Mendelsohn from “ugly” portobello and crimini mushrooms).

Petition: Push the U.S. Senate to Prevent a Humanitarian Disaster in Yemen