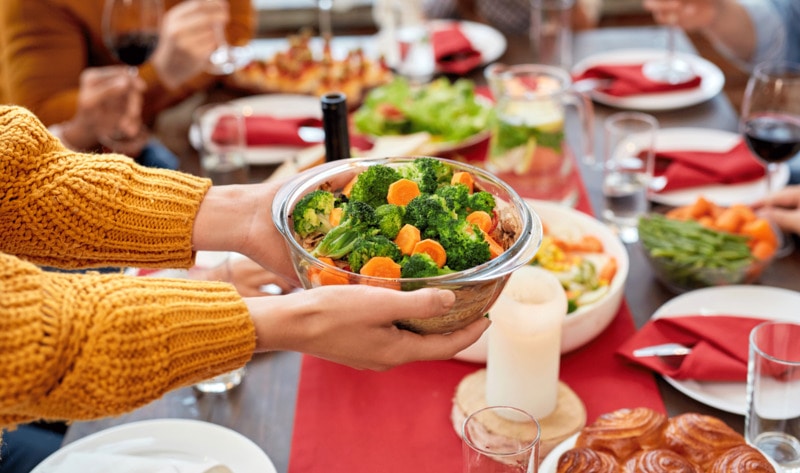 This holiday season, 70 percent of American households will be serving at least one plant-based dish, according to research released this week by OnePoll. The survey—which was commissioned by plant-based company Eat Just—polled 2,000 Americans evenly distributed into two groups of 1,000 millennials (born between 1981 and 1994) and 1,000 baby boomers (born between 1946 and 1964) to find that nearly one third of Americans expect a family member to be eating more plant-based foods this holiday season. Conducted between November 23 and November 24, the poll also found that 81 percent of millennials are more open to changing their holiday traditions, versus 71 percent of baby boomers.

Healthy holidays
When it came to eating healthier, 74 percent of millennials are giving it a try over the holidays, compared to 49 percent of baby boomers—with 39 percent of millennials eating healthier and more plant-based this winter. And  while health is emerging as a concern during the 2020 holiday season, 70 percent of respondents are eager to see traditional dishes on the table, including mashed potatoes (44 percent) and apple pie (39 percent) to sweet potatoes (45 percent), and pecan pie (31 percent).

Starting new traditions
With this data in hand, Eat Just is launching a “Start Your Tradition” marketing campaign—which will appear on YouTube, television, and multiple social media platforms—to help consumers navigate the shift toward plant-based eating this holiday season. The campaign focuses around the company’s vegan mung bean-based JUST Egg and how it can be used as a one-for-one swap in traditional family recipes to make them plant-based.

Across the pond
American consumers are not the only ones planning to change their holiday menus this year. According to a recent poll conducted by cheese brand Applewood, 20 percent of people in the United Kingdom are planning to cook a fully vegan Christmas dinner and nearly half (46 percent) of respondents anticipate having at least one vegan dinner guest.

From Crunchy Mediterranean Salad to Emerald Kale Detox Soup: Our Top Vegan Recipes of the Day!