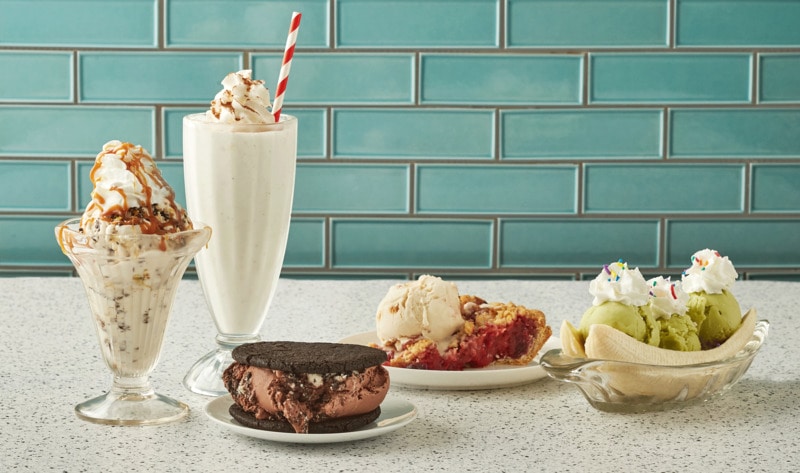 From January 1 to February 4, artisan ice cream chain Salt & Straw will launch its “Vegandulence” series, a menu that celebrates the indulgence of vegan ice cream. While the chain typically offers a few rotating vegan flavors on its regular menu, every January co-founder Tyler Malek shifts focus to offer a wider selection of flavors that incorporate unique bases and mix-ins—all made in-house—to celebrate plant-based ingredients such as coconut cream, avocado, and hazelnut butter. “We want to reclaim the concept of vegan desserts by leaning into the indulgence and wildly intoxicating diversity of flavors that plant-based ingredients have to offer,” Malek told VegNews.

Putting cow’s milk to shame
On this year’s menu, Malek is testing a variety of textures and flavors that he says cannot be achieved with dairy, such as the richness that results from combining three forms of fat in the Chocolate Hazelnut Cookies & Cream flavor or the simplicity of letting core ingredients shine in the Banana Avocado Sorbet.

“In the ice cream industry, the word ‘vegan’ is far from normalized and, in fact, almost all innovation has gone towards trying to strip away the flavors of plant-based ingredients and replace them with ‘natural dairy flavor extract,’” Malek said. “What the industry is forgetting is that coconut cream has a makeup of fats that are so exquisitely velvety that it puts cows’ cream to shame; toasted oat milk can create a flavor profile that even the fanciest cow’s milk would envy; and avocados have a natural emulsification of fats so elegant that it’s taken food scientists hundreds of years and loads of artificial ingredients to get churned ice cream to behave similarly.”

The best ice cream, period
Salt & Straw’s vegan menu is not about offering an alternative to dairy but a showcase of the possibilities of applying traditional ice cream-making methods to plant-based ingredients. “We’re using everything we know about the science of ice cream including the freezing of proteins, emulsifying of fats, and integration of flavors to make the most indulgent vegan ice creams possible,” Malek said. “Our dream is to change the dialogue in this world because this ice cream isn’t just ‘good for being vegan,’ this ice cream is life-changing delicious because it’s vegan.”

The Vegandulgence menu will be available for shipping nationwide online, as well as at Salt & Straw scoop shops in Los Angeles, San Diego, San Francisco, Anaheim, CA, Portland, OR, and Seattle, WA, and for local delivery.