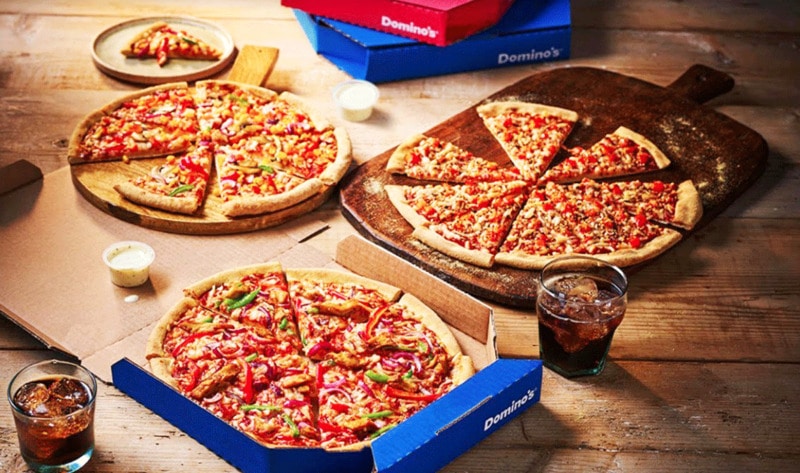 Next month, Domino’s will add vegan meat to its menu for the first time at its locations across the United Kingdom. Starting on January 4, Domino’s will offer a vegan chicken-topped This Chick-Ain’t Pizza along with Southern-fried vegan chicken nuggets. The chain’s newest additions are launching in time for the annual Veganuary campaign—which challenges participants to go vegan for the month of January and beyond.

Vegan at Domino’s UK
The new vegan chicken items join a variety of new plant-based options at Domino’s UK. In September, Domino’s added two vegan pizzas at its more than 1,200 locations across the UK and Ireland: The Vegan Vegi Supreme (topped with mushroom, corn, onions, red peppers, and tomatoes); and the Vegan Margherita (topped with a vegan cheese developed in-house by Domino’s). The pizzas are made on a new hand-stretched vegan dough and can be customized with a variety of vegetable toppings. In addition to the pizzas, Domino’s created a vegan version of its popular Garlic & Herb dip which it formulated with pea protein instead of dairy milk and eggs.

“Our food innovation team hasn’t stopped experimenting in the test kitchen since we launched our vegan-friendly range a few months ago and we just know our customers are going to adore the Chick-Ain’t pizza and Vegan Nuggets,” Domino’s Legume Legend Melanie Howe said. “Feedback on the existing range has been overwhelmingly good and it’s brilliant to offer even more choice to customers. These delicious additions land in stores just in time for the start of Veganuary—pizza and plants truly are a match made in heaven.”

Veganuary takes off
Veganuary was founded in 2014 and had more than 400,000 participants from 192 countries last year. Every January, restaurants release limited-edition vegan items in celebration of Veganuary and often keep them on the menu if they prove popular—which was the case with Pizza Hut UK, which added the Jack ‘n’ Ch**se vegan pizza to its permanent menu in 2019. Last year, 600 businesses participated in Veganuary, launching 1,200 vegan products or menu items in support.

Amazing Animal Organization Saves 25 Horses From Woman Who Was Starving Them!