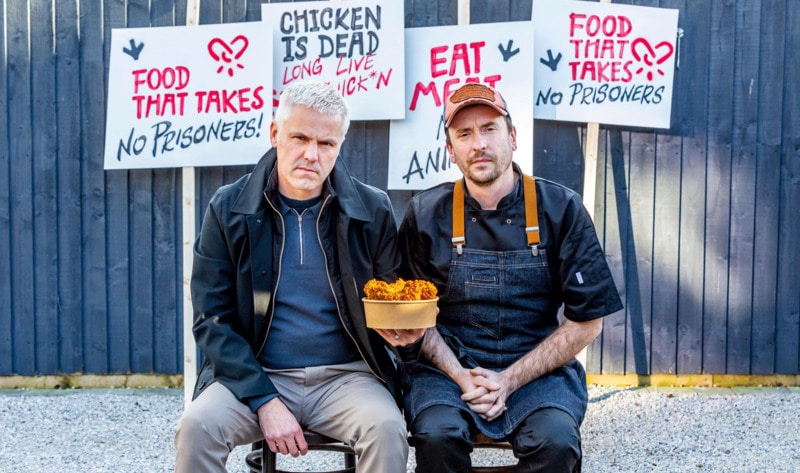 New vegan fried chicken brand VFC recently launched across the United Kingdom. The new brand was created by businessman Matthew Glover—who founded vegan campaign Veganuary with his wife Jane Land in 2014—alongside Source restaurant owner Adam Lyons as a form of protest of the animal agriculture industry. Initially, the duo is launching VFC with three seitan-based and soy-free products (available in original or spicy flavors) through the brand’s website: Bites & Fries, with a tangy barbecue sauce, VFC Bites, and VFC Fillets. “I am a businessman turned activist and VFC is very much a marriage of the two,” Glover said. “There are many ways to dismantle unjust systems, and we intend VFC to be part of the movement that puts an end to factory farming for good.”

Food for thought
The idea for VFC began at Source, where Lyons served vegan meals alongside a menu that included animal products. “Among the vegan meals on offer was the best vegan fried chick*n I had ever tasted,” Glover said. The Veganuary founder then took Lyons—who was inspired by Glover to participate in Veganuary—to a chicken factory farm to show him the cruelty that goes into making animal products for human consumption. “Adam had never thought too closely about how chickens were reared before then, and that visit was a game-changer for him,” Glover said. “He went in as a fledgling vegan and came out 100 percent committed to getting VFC into the mainstream market.”

Footage gathered during this visit now graces VFC’s website and the duo is prioritizing getting their vegan chicken to price parity with its animal-derived counterpart and eventually making it cheaper. Glover and Lyons also partnered with award-winning brand design consultancy Elmwood—which worked with the Wicked Kitchen brand—to launch in a big way, with billboards and online advertisements. While VFC is currently only available for purchase online, the founders have hired a sales director whose main focus is to get their vegan fried chicken into retailers and restaurants.

“We’re not messing about,” Lyons said. “We’ve developed a fantastic product that looks, cooks, and tastes like chicken, we’ve appointed an ambitious team, and we are ready to play our part in emptying those factory farm sheds. That’s what drives us on.”

Colorado Now Has a Statewide Meat-Free Holiday, Thanks to Governor Jared Polis