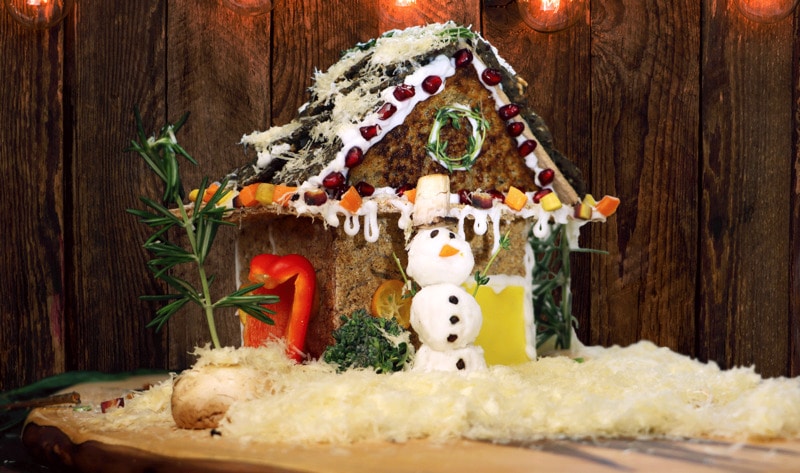 Matthew Ravenscroft, Chef de Cuisine at Toronto-based Rosalinda Restaurant, created a vegan cheese chalet as part of Violife Foods’ 2020 campaign #SantaButVegan. Inspired by this year’s holiday trend of creating charcuterie gingerbread houses and other creative snacks for Santa, Ravenscroft constructed a vegan house using five of Violife’s cheeses. The chalet was built to support the brand’s effort of encouraging Canadians to make vegan snacks for Santa—who in 2020, Violife says, “is more compassionate and more planet-conscious than ever, and he values sustainability as part of his joy-making impact.”

Building the chalet
To make the chalet, Ravenscroft used Violife creamy original spread as “mortar” to hold the roof and walls together and to create icicles on the roofline. The chef made the front door from Violife smoked provolone and grated Violife parmesan-style wedge to create snow. For the snow person outside, Ravenscroft used a combination of Violife feta-style and Violife creamy original. Other decorations include a broccolini shrub, red pepper sled, decorative jewels (and a door knob) made from pomegranate seeds, carrot cubes as lights, trees made from rosemary sprigs and mushroom caps, kumquats as windows, and circular crackers as roof shingles. The roof of the chalet is made from a grilled cheese sandwich filled with roasted apples and Violife’s mature cheese-style slices and the smoked-flavoured provolone style slices.

“This is a first for me; I’ve never seen anything like this vegan ‘cheese’ chalet,” Ravenscroft said. “I knew, having used Violife for various recipes, that their products could perform for this challenge. I had to play around to come up with the architecture; the magic really happened when I decided on the load-bearing grilled cheese roof.”

DIY vegan cheese house
Violife released a step-by-step tutorial, guided by Ravenscroft, to help fans create the cheese chalet at home. As part of the #SantaButVegan campaign, the brand is donating $2,000 to four organizations—Animal Justice, FoodShare Toronto, Red Door Shelter, and Team Dog Rescue—chosen by social media influencers who will be participating in the campaign on their Instagram accounts from now until Christmas Eve.

How to Invite Birds Into Your Yard