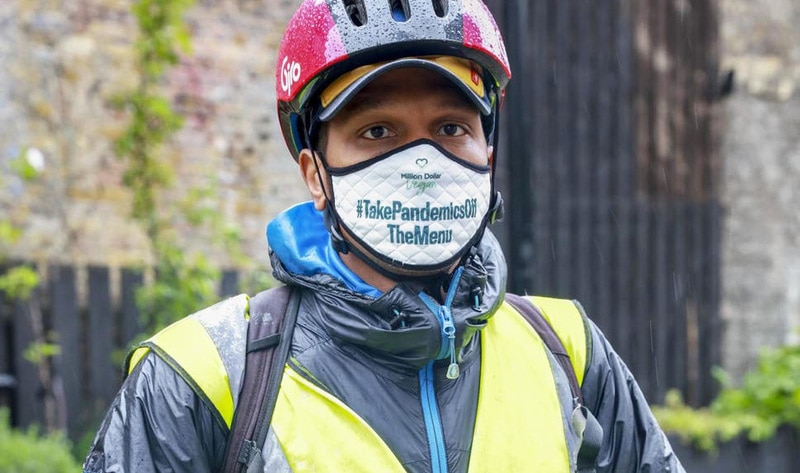 Today, a group of cyclists will descend upon Los Angeles to deliver 1,000 vegan meals to people in need during the ongoing COVID-19 pandemic. The group—dubbed “The Great Vegan Meal Train”—is distributing meals as part of nonprofit Million Dollar Vegan’s (MDV) initiative to deliver one million meals to those in need by 2022. “This is the first time that we have decided to form a meal train so that cyclists can deliver large volumes of food to those that need it while staying socially distanced. We have done giveaways of a thousand meals before, but we wanted to make this one a little special because of the holidays, the time when people in need are often forgotten,” MDV CEO Naomi Hallum said. “We want to make sure that we are reaching out to people, people who may otherwise go hungry as well as essential workers who, unlike the majority of us, don’t necessarily get to spend the holidays at home with their families. In addition to shelters, youth centers, and the elderly, we’ll be delivering meals to hospital workers and other essential workers.”

Taking pandemics off the menu
To support local restaurants, MDV purchased meals from Concierge Kitchen (truffle mushroom mac and cheese), Sugar Taco (veggie burritos), Veggie Grill (Mediterranean falafel wraps), and Voodoo Vegan (creole-style red beans, sausage, and rice bowls) which cyclists (some of whom will be dressed in fun costumes) are delivering to Hollywood Food Coalition, Southern California Hospital at Hollywood, Los Angeles LGBT Center, TransLatin@ Coalition, volunteers at Project Angel Food, and two elderly-living facilities in Hollywood Plaza. “This is a terrible time for restaurants, too. We are not asking any of them to donate food and nobody can afford to do that during these difficult times,” Hallum said. “Our mission to deliver one million meals is also aimed at supporting restaurants and small businesses, buying food from them during a time when they’re struggling for business and taking it to people who wouldn’t normally have access to food like this,”

As part of the initiative, MDV also aims to raise awareness of how pandemics emerge and spread through their Take Pandemics Off the Menu campaign, which is being backed by leading experts in public health and disease prevention experts, including Angie Sadeghi, MD and Kim Williams, MD, as well as vegan actress Alicia Silverstone, R&B artist Mya, WWE wrestler Ryback Reeves, and Team USA Olympic volleyball player Dustin Watten.

Over 120 Whales Die After Being Stranded off New Zealand Coast