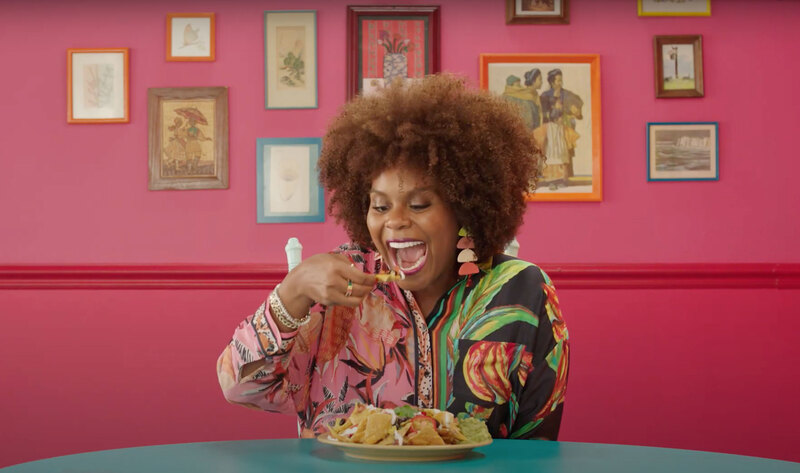 Vegan influencer Tabitha Brown stars in a new video to promote Veganuary, a campaign that challenges people to go vegan for the month of January and beyond. Produced by Pollution.tv and directed by Asher Brown, the video depicts the actress eating a variety of meals—from doughnuts to nachos to colorful veggie bowls—to complete the challenge before she gets stymied by a fly, who she accidentally eats, in the kitchen. The video sends a message that perfection should not hinder success, a message Brown and Veganuary have in common in their approach to transitioning to a vegan lifestyle. “If you ever thought about going vegan but didn’t want to do it alone, Veganuary has you covered,” Brown said. “We can all try it together at the same time.”

Brown rose to fame in 2017 when a video of her eating a vegan Smoky TTLA sandwich from Whole Foods went viral. Since then, the actress amassed millions of followers on social media (including 4.5 million on TikTok), secured her own show on the Ellen network, and made countless appearances on television shows to help celebrities (such as Laverne Cox, Tiffany Haddish, Jada Pinkett Smith, and Steve Harvey) cook vegan food.

Veganuary gains steam
Founded in 2014 by Matthew Glover and Jane Land in the United Kingdom, Veganuary has amassed more than one million participants since its launch. Every year, businesses in the UK cater to Veganuary participants by debuting plant-based products and menu items. This year, a slew of new options have been launching ahead of Veganuary in the UK, including Hellmann’s three new mayonnaise flavors (Garlic, Chipotle, and Baconnaise); Heinz’s Vegan Mayo and Salad Cream (a creamy salad dressing); four new vegan sandwiches at Starbucks; a vegan chicken sandwich and chocolate cookie at Subway; and more. Earlier this month, Glover also launched VFC, a new vegan chicken brand created to protest the animal agriculture industry.

Currently, the campaign has 350,000 pledges and is well on its way of achieving its goal of 500,000 participants this January.

Tell the NFL to ban Michael Vick and Make it Illegal to Keep Dogs on Chains in Cold Weather: 10 Petitions You Should Sign This Week to Help Animals