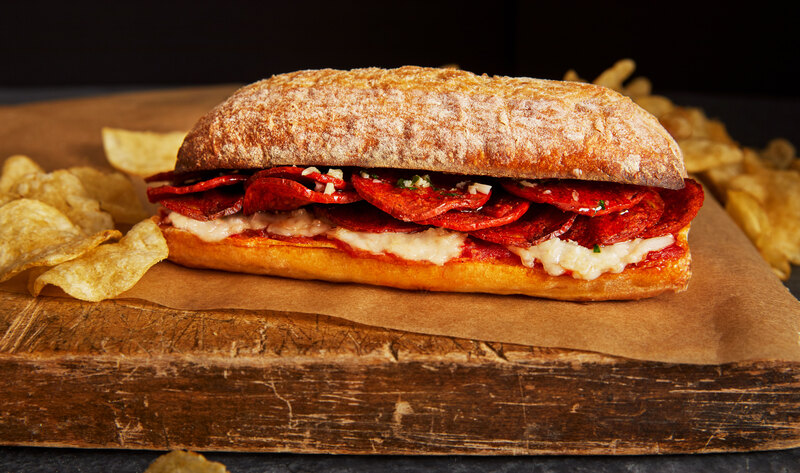 Vegan brand Field Roast Grain Meat Co. recently launched Plant-Based Pepperoni. The new soy-free pepperoni is made with pea protein, features fat marbling to mimic its pork-derived counterpart, and is spiced with pieces of fennel, cracked black pepper, garlic, and paprika. The vegan pepperoni is now available to foodservice providers in Canada and the United States and will start shipping to retailers in the second quarter of 2021, which are expected to start stocking the pepperoni in the first quarter of the year.

Vegan pepperoni on the menu
Today, Canadian chain Pizza Nova will be the first to feature Field Roast’s Plant-Based Pepperoni on its menu at more than 140 locations across Southern Ontario. “Pizza Nova is the first major Canadian pizza operator to offer the groundbreaking Field Roast Plant-Based Pepperoni,” Adam Grogan, COO of Field Roast’s parent company Greenleaf Foods, said. “We’re excited to partner with them because of their commitment to crafting flavorful, quality foods, just like Field Roast.”

Pizza Nova will offer the vegan pepperoni as a topping for pizzas and panzerottis (similar to a calzone), and as part of six new plant-based creations, including new pizzas. “We are proud to offer a plant-based pepperoni that delivers on our Puro Promise of sourcing high-quality products that do not compromise on taste,” Pizza Nova President Domenic Primucci said. “The addition of Field Roast Plant-Based Pepperoni to our menu will allow us to expand our offerings and better serve flexitarians, vegetarians, and vegans alike—always in the same careful and loving manner.”

Banana Flour 101! The Newest Health Trend to Hit the Scene