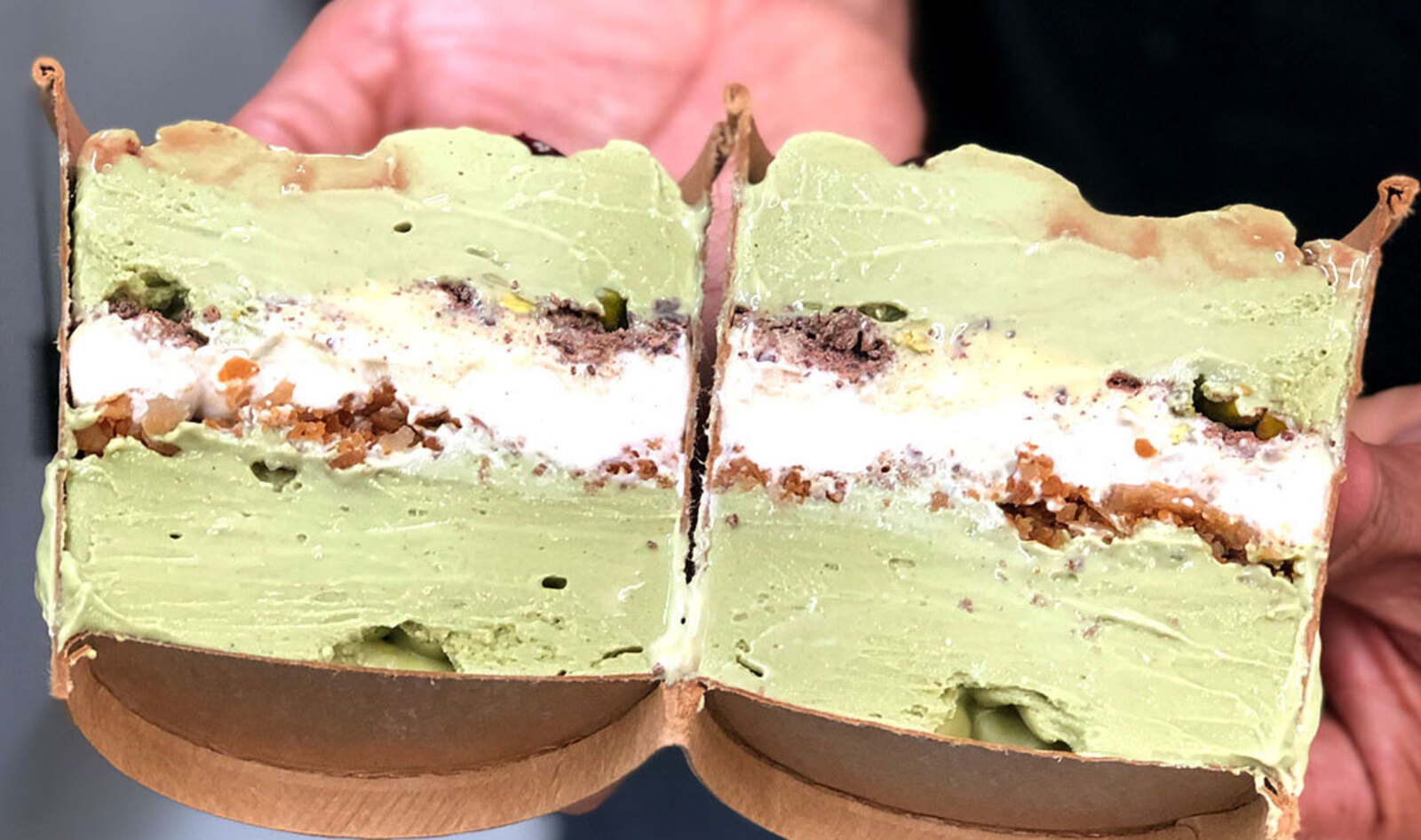 Acclaimed chef Matthew Kenney is now selling dairy-free Cannoli and Budino ice cream flavors at his plant-based Italian restaurant Baia in San Francisco, CA. The new ice cream offering is a collaboration between Kenney and ice cream company Eclipse Foods, a San Francisco food technology startup which creates what it calls an “udderly indistinguishable” vegan milk with whole food ingredients such as cassava and ancient corn that mimic cow-derived dairy on a molecular level without the use of soy, nuts, coconut, stabilizers, gums, or GMOs. The Cannoli flavor features a Sicilian pistachio ice cream base layered with vegan ricotta cheese and dotted with cherries while the Budino flavor is made with an espresso ice cream base strewn with chocolate and turrón.

Baia’s Chef Jameson Poll created the flavors with the aim of evoking nostalgia while staying true to the restuarant’s upscale plant-based Italian menu, which includes delicately prepared pasta dishes, pizzas, and cocktails. “Our intention was, of course, to stay true to the Baia concept, our food, and our overall style,” Poll told VegNews. “Within that framework, we also wanted to be creative, and give our culinary team an opportunity to express nostalgic flavors from childhood. All of our mix-ins are made in house, always in small batches, spun and hand packed fresh daily. We are excited to be working with Eclipse to bring these incredible flavors to the community.”

Both flavors are sold for $15 per pint and are available for pickup and local delivery.

Eclipse was founded by two food-technology experts: Aylon Steinhart (who previously worked with nonprofit The Good Food Institute) and Thomas Bowman (an award-winning chef and the former Director of Product Development at San Francisco startup JUST). In 2019, the company made its debut on the menu of artisan ice cream shops Oddfellows in New York City (in Miso Cherry and Olive Oil Plum flavors) and Humphry Slocombe in San Francisco (in a Mexican Hot Chocolate flavor). Since then, Eclipse has grown its distribution substantially to restaurants, ice cream shops, and food trucks nationwide.

In July 2020, the brand partnered with Michelin-starred chefs across the country for a limited-edition flavor series with 100-percent of proceeds from sales going to support charities. That collaboration resulted in flavors such as Salty Black Sugar Caramel created by Trigg Brown of NYC restaurant Win Son; Toasted Almond Thyme created by Nicole Krasinski of San Francisco staple State Bird Provisions; and Blackberry Tarragon created by Greg Baxtrom of Brooklyn, NY restaurant Olmstead. Some of these flavors are still available on Eclipse’s website for nationwide delivery alongside its signature vanilla, chocolate, and cookie butter flavors.