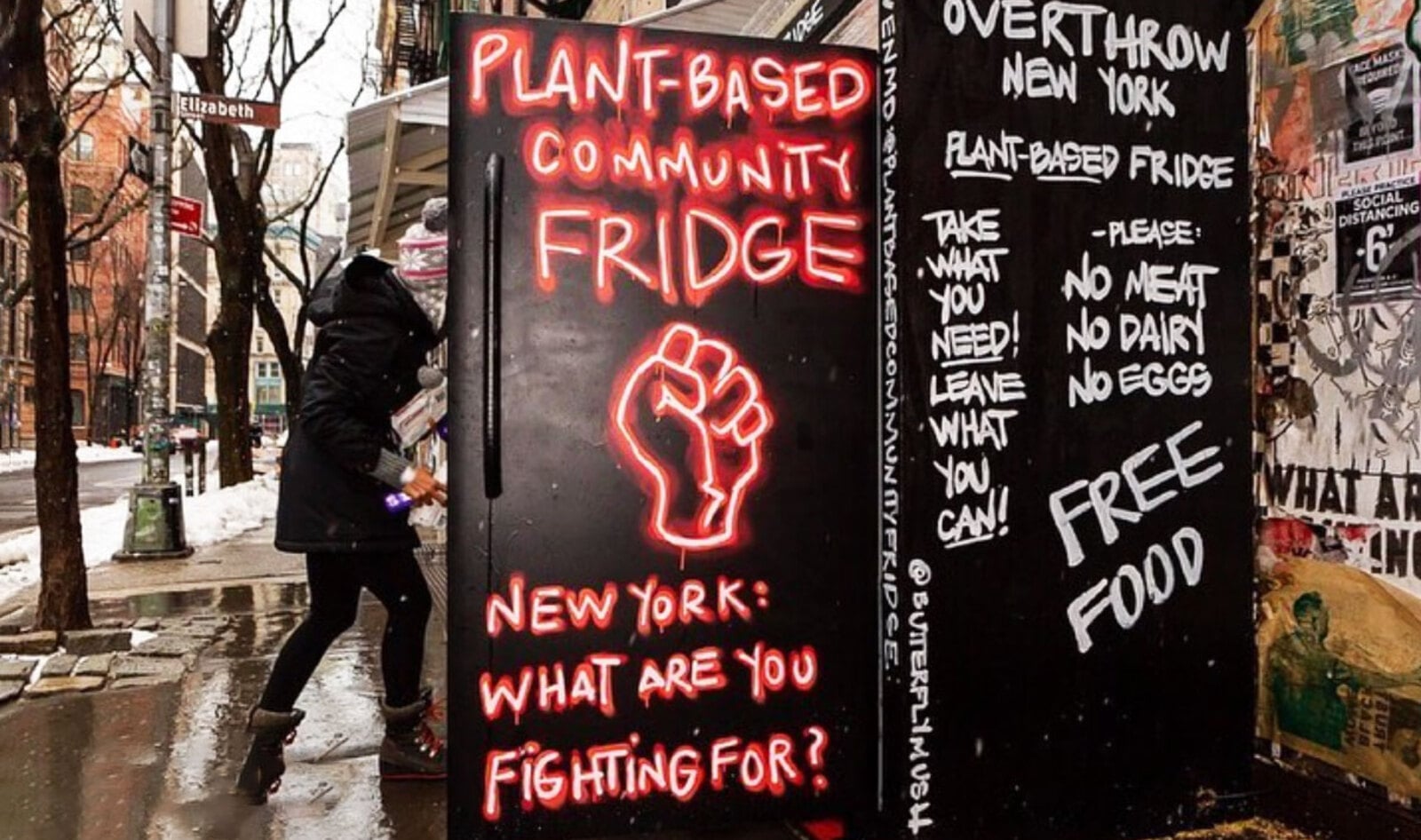 Spearheaded by Eloísa Trinidad, Executive Director of Chilis On Wheels New York, and longtime activist and community organizer Power Malu, the community fridge was inspired by an urgent need to provide healthy, animal-free foods to the local community. “Not only is there a COVID-19 pandemic, but [there’s] also the pandemic of hunger and chronic disease,” Trinidad and Malu told VegNews. “The city and food justice organizations were not considering the health of the community or providing options for vegans, plant-based [folks], or those who simply want to eat healthier. They were hoarding all the resources and funding, while not including the community in the conversation, despite [the demand for] more plant-based foods. They were also not considering pre-existing conditions that can increase the rate of death from COVID-19, [conditions] that are increased by the consumption of animals.”

Plant-based plans for the future

Despite an impending snow storm, the Overthrow Community Fridge inaugural event and donation drive proved to be a big success. After receiving food, clothing, and toiletry donations, the fridge is emptying fast, note Trinidad and Malu. “The people who are coming by are [folks] who are unhoused, [people] who have homes but who are hungry and food insecure, families, individuals, students, and people laid off or not getting enough hours at work,” said Trinidad and Malu.

Passionate food justice and animal-rights activists, Trinidad and Malu plan to launch cooking demos with items found in the fridge, trips to animal sanctuaries for kids in the local community, and additional efforts surrounding mutual aid and housing justice. “We were inspired by the power of community and accessibility. We believe everyone, regardless of socioeconomic status, should have access to healthy food and the ability to make ethical choices,” Malu and Trinidad said. “We cannot disregard how food is used to oppress others: from animals to the humans who are affected by [the current food system’s] multi-level oppression.”

While food and clothing donations can be dropped off at any time, monetary donations can be made via Venmo, crowdsourcing site GoFundMe, or by emailing plantbasedcommunityfridge@gmail.com. With additional support and donations, Malu and Trinidad aim to launch more community fridges across New York City. “What we truly need is support across the board. We aren’t just battling immediate hunger, we’re fighting a system that keeps people impoverished while criminalizing poverty,” they said.

Designed by artist and activist Andrea Acevedo, the Overthrow Community Fridge is open 24/7 and is located outside Overthrow New York at 9 Bleecker Street.