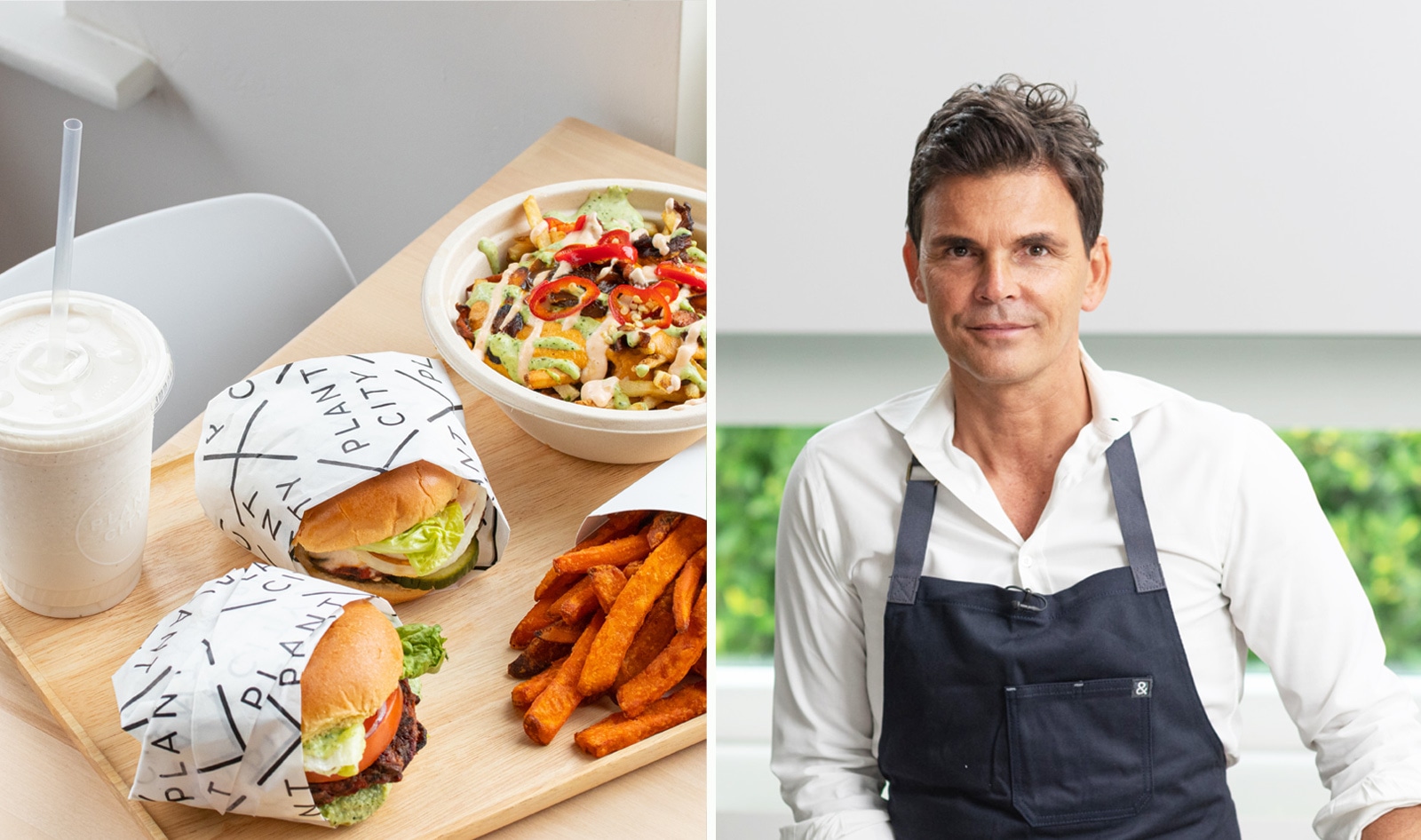 Plant-based eatery Plant City X recently opened in Middletown, RI, as the first vegan drive-thru restaurant in the Northeast. Plant City X is the newest concept to launch from chef Matthew Kenney and Rhode Island-based entrepreneur Kim Anderson, owners of all-vegan food hall Plant City in Providence. In crafting the menu for Plant City X, Anderson consulted with Plant City’s executive chef Luis Jaramillo and devised a pared-down menu of the food hall’s best-selling items—as well as some new offerings—that would work in a fast-paced environment. “We can actually move 65 cars an hour through our drive-thru, so we needed items that could be made really fast,” Anderson told VegNews.

The Plant City X menu includes a variety of burgers (made from beans, vegetables, and grains), “chik” sandwiches and nuggets (crispy fried tofu), salad bowls, several varieties of mac and cheese (all gluten-free), and sweet potato and regular French fries with toppings. The “X-treme Fries,” for example, are loaded with pickled fresno peppers, “X” sauce, cashew cheddar, shiitake bacon, caramelized onions, and cilantro mayo. Plant City X also serves breakfast sandwiches, desserts such as frozen yogurt parfaits (made with frozen coconut yogurt and a plethora of toppings), cookies and brownies, and shakes. “It’s all meant to be fun and accessible … crave-able food that people want to eat,” Kenney told VegNews.

Just outside of Newport, the new vegan drive-thru is housed in a 3,600-square-foot building featuring side-by-side oversized arched windows and a patio out front with sleek black metal picnic tables fitted with black and white checkered umbrellas. A former Papa Gino’s that was retrofitted with a drive-thru window, Plant City X offers seating for 20 outside and seats approximately 40 inside with COVID-19 restrictions, but will have room for 70-plus customers once restrictions are lifted. The restaurant also has its own app and customers can use it to place orders at the drive-thru window or get their food delivered within a 10-mile radius.

Plant City X was a natural next step after Plant City, which opened in June 2019 to rave reviews. “In just over 20 months, with one big building in Providence, we’ve built a brand,” Anderson said. “What we kept hearing from our customers is, ‘You have to open a Plant City near us.’ We have many customers who come up from the Newport area who say, ‘Please come to Newport,’ so when we started thinking about a drive-thru concept and saw this great building in Middletown that had been empty for more than a year and a half, we had a good feeling about it.”

Anderson and Kenney both laud the community for embracing Plant City X and say they are thrilled to give back in every way possible. In addition to using local vendors for everything from burger buns to mushrooms, the restaurant makes sure its employees are paid well, and that includes an open pool tipping system where everyone from the dishwasher to the cashier shares in the collected tips. “Our staff is amazing,” Anderson said. “We get compliments all the time. We want people to feel that they’ve just had the best fast-food, drive-thru experience that they’ve ever had.”

The duo plans to expand the vegan drive-thru concept across Southern New England. “We’re looking at five different locations right now. They’re all highly concentrated commercial areas where these kinds of businesses already exist,” Anderson said, noting that Plant City X in Middletown is wedged between Taco Bell on one side and, one building removed, a Burger King on the other.

Kenney, who has opened seven new restaurants during the pandemic—including vegan Italian eatery BAIA in San Francisco—said the drive-thru concept works well at a time when social distancing is the norm. “I think that Plant City X is a great model to scale and it can work anywhere where there’s traffic. I think there’s going to be a big demand for it,” Kenney said. “The first one is working great and we want to really tighten up the operation with the next two or three and make it as good as it can be. From there, I see unlimited growth.”

A celebrity chef, author, and wellness entrepreneur, Kenney published 12 cookbooks and has opened or is in the process of opening more than 40 restaurants around the world. Given the growth of veganism in recent years, Kenney believes that Plant City X will be part of the future he has always envisioned. “When I went plant-based 18 years ago, I really saw it as the future,” Kenney said. “I didn’t know how long it would take, but I believed that plant-based would penetrate every arena where food is served, whether it’s in a school, at a hospital, on an airplane, or at a drive-thru. To me, food is plant-based; that’s what it’s meant to be, and I’m excited at how quickly things have accelerated recently.”

How Climate Change Could Impact These Three Iconic American Cities