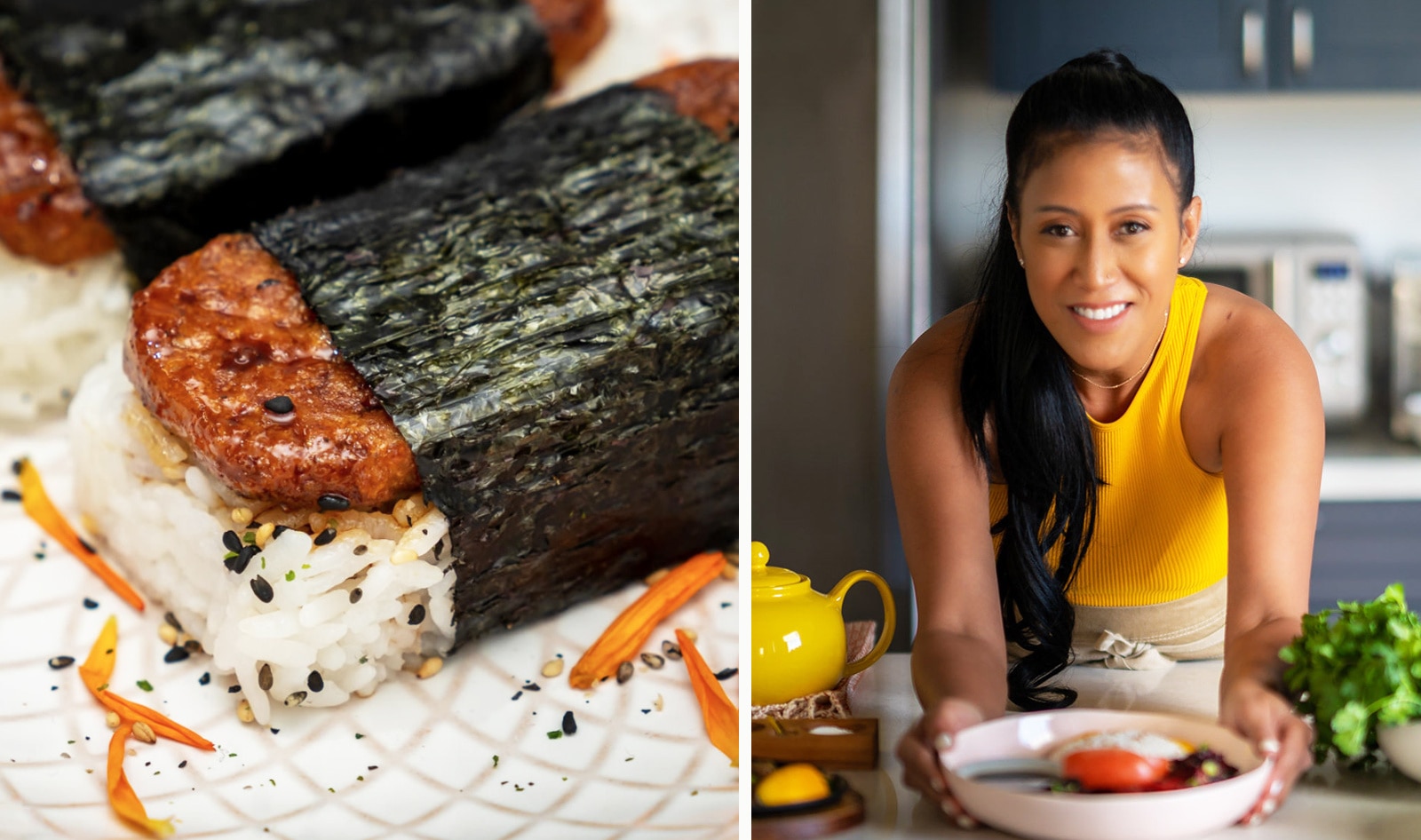 This week, chef Reina Montenegro’s new vegan restaurant Chef Reina in Brisbane, CA will be one of the first places in the United States to serve OmniPork’s vegan spam. Hong Kong-based OmniFoods launched its Vegan Luncheon (a plant-based copycat of Hormel’s SPAM), alongside OmniStrips (a vegan pork shoulder), under its OmniPork brand last year in Hong Kong. In October 2020, OmiPork’s vegan spam debuted at 280 McDonald’s and 122 McCafé locations in Hong Kong and Macau before expanding to the McDonald’s menu in three Chinese cities (Shanghai, Guangzhou, and Shenzhen)—the first time McDonald’s has added vegan meat to its menu in China.

OmniFoods founder David Yeung, an eco-conscious entrepreneur who owns social enterprise Green Monday, developed the vegan spam from soybeans, wheat, beets, and coconut oil to provide consumers with a better choice with less sodium, no nitrates, and zero animal cruelty. “Chef Reina has been enthusiastically awaiting the arrival of OmniPork in the US. I’m just thrilled that her restaurant opening coincided with our US launch,” Yeung said. “Her culinary creativity and passion will most certainly bring a whole new plant-based experience to vegans and meat-eaters alike.”

In addition to OmniPork items, Chef Reina serves a variety of Filipinx dishes such as lechon, sisig, and pancit, along with breakfast dishes such as bacon and corned beef silog and ube pancakes on the weekends. The menu also features a touch of American fare with Impossible Burgers, chick’n sandwiches, and BLTs.

Prior to the pandemic, Montenegro operated a trio of vegan restaurants in the Bay Area under the “Nick’s” brand—a remnant of the flagship location, Nick’s Kitchen in Daly City, that she acquired from a Filipinx family and transformed into a vegan restaurant in 2017. After closing all Nick’s locations due to the COVID-19 pandemic, Montenegro dropped the Nick’s branding and launched Chef Reina as an online storefront in October 2020. The new restaurant space is the next step of Montenegro’s vision of making flavorful vegan Filipinx food accessible to more people.

“It feels so good to be on my own and doing what I absolutely love without anything or anyone holding me back,” Montenegro said. “I feel that finally my life is aligned where I can soar high and do what I am passionate about, which is ultimately to convince people to end suffering, not only to the environment or to the animals, but also themselves.”

Currently, the Chef Reina space features a walk-up window where patrons can pick up online food orders along with “care packages” (vegan meat by the pound that they can cook at home), with plans to build out an on-site parket to allow for seating. The chef is working to expand the business with nationwide shipping of the care packages—which include meats such as tocino, caldereta, and carnitas. Montenegro will also use the space as a cooking studio where she will produce virtual events, host cooking demonstrations, and work on collaborative projects with other chefs to help bring vegan food to their menus.