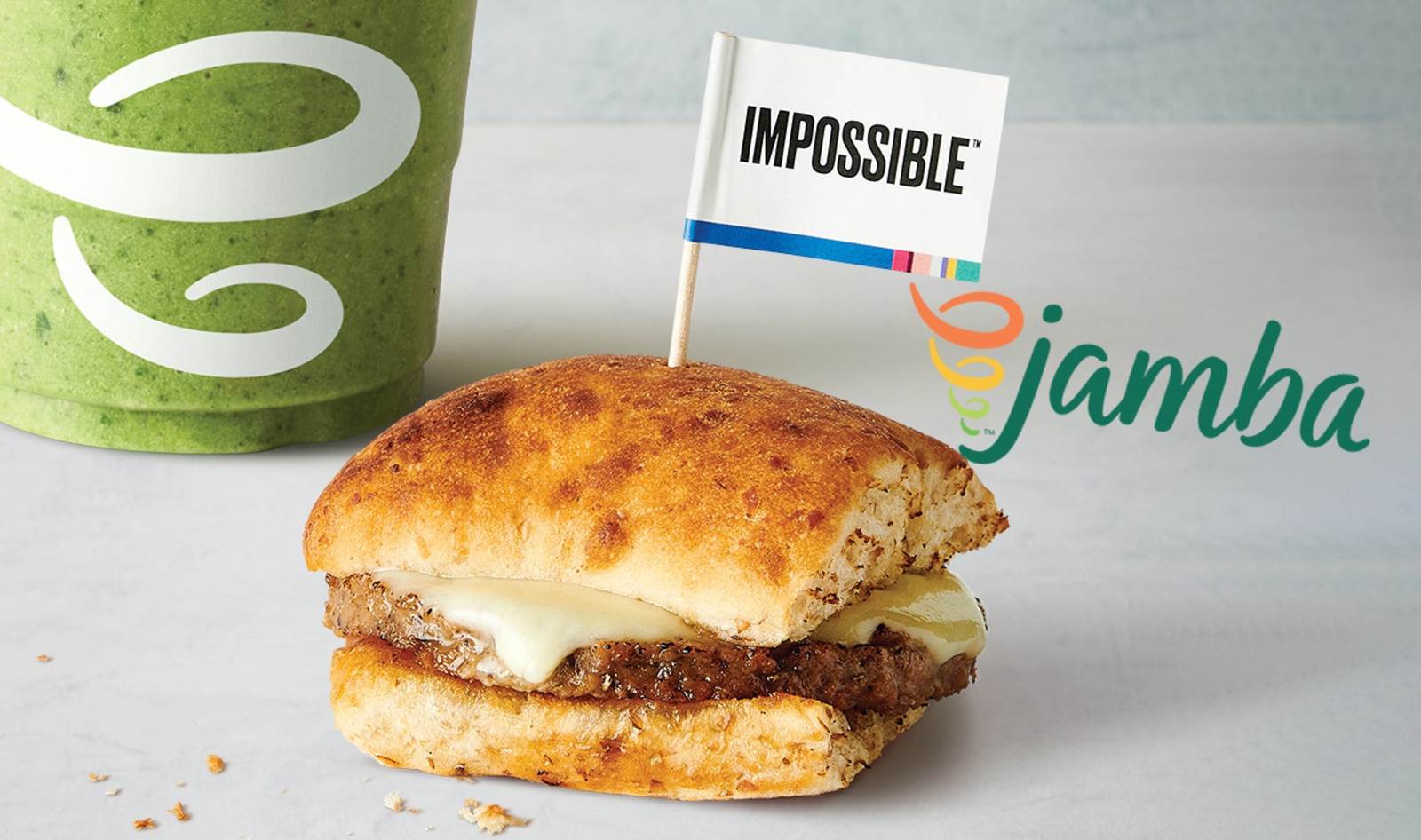 Starting April 12, smoothie chain Jamba will add the Impossible Handwich to its permanent breakfast menu nationwide at its 725 locations. The new sandwich is available for $3.79 and made with a plant-based Impossible Sausage patty and served with dairy cheese on a toasted sprouted grain bun. A spokesperson for Jamba told VegNews that customers can omit the cheese and VegNews can confirm that the bread used is free from animal-derived ingredients.

“At Jamba we pride ourselves in offering our guests a wide selection of menu items that meet all lifestyles,” Danielle Fisher, Vice President of Marketing at Jamba, told VegNews. “For years we’ve been a go-to morning stop with our freshly blended smoothies, juices, and bowls. Now, the Impossible Handwich, featuring delicious sausage made from plants, along with our Classic Handwich and Egg Bake, deliver guests flavor-packed, hand-held options that bring even more variety as they kick start their day. We look forward to seeing the response to our Impossible Handwich and will use that to fuel our future innovation.”

In 2019, Jamba became the first national smoothie chain to offer Oatly’s oat milk as a swap for dairy in its smoothies and features the dairy-free milk in its vegan Smooth Talkin’ Mango smoothie. In 2020, Jamba released the first vegan version of its seasonal Pumpkin Smash Smoothie which was made with Oatly’s oat milk and So Delicious Oatmilk ice cream.

Jamba is the latest chain to add plant-based options to its breakfast menu. In June 2020, Starbucks added the Impossible Breakfast Sandwich to the majority of its locations nationwide—representing the first time that Starbucks has offered plant-based meat on its menu. While this sandwich cannot be ordered vegan (as it is premade with animal products such as cheese and eggs), Starbucks began testing a fully vegan Plant Powered Breakfast Sandwich (made with Impossible Sausage, a mung bean-based egg, and non-dairy cheese) at select locations in Issaquah, WA and Dallas, TX last year.

Last month, coffee chains Peet’s Coffee and Philz both added fully vegan breakfast sandwiches to their menus. At Peet’s, guests can order the Everything Plant-Based Sandwich as part of its spring menu at participating locations nationwide. The new sandwich features a Beyond Meat Breakfast Sausage patty, mung bean-based folded JUST Egg, melted dairy-free cheddar cheese, and comes served on an everything bagel thin. At Philz, the new Plant Powered Sandwich is available at all locations and is made with JUST Egg Folded, Beyond Breakfast Sausage patty, Daiya cheese, and is served on an English muffin.

Joaquin Phoenix Has the Best At-Home Vegan Barbecue Thanks to LA Eatery Crossroads … and You Can, Too