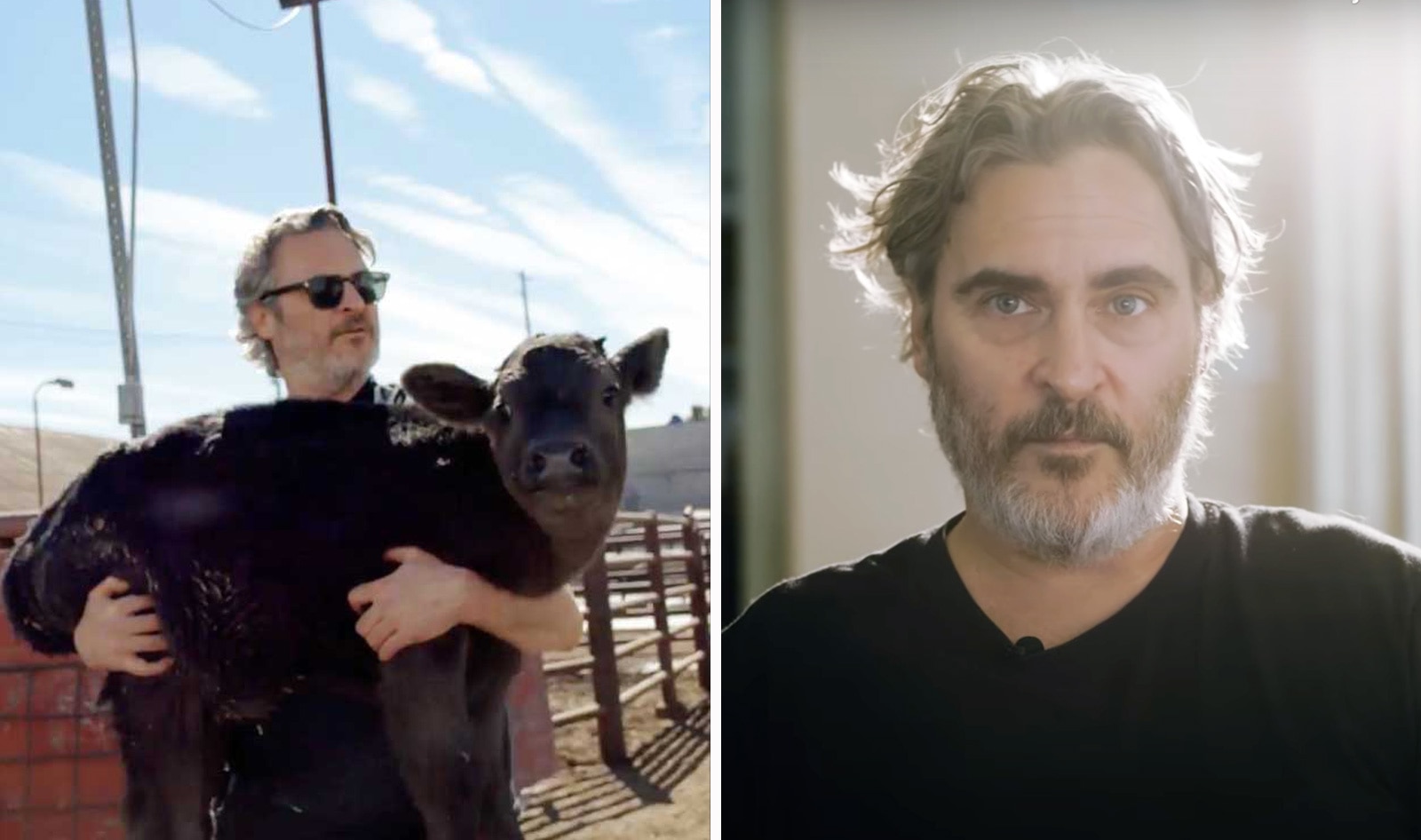 Actor and vegan activist Joaquin Phoenix recently returned to Farm Sanctuary in Acton, CA to visit Liberty and Indigo—a mother and her calf that he helped rescue from slaughter one year ago. In February 2020, on the heels of his historic, animal-rights centered Oscar acceptance speech for best actor for his lead role in Joker, Phoenix went to slaughterhouse Manning Beef in California. There, Phoenix negotiated the release of the animals from the slaughterhouse alongside a group that included fiancée and fellow activist Rooney Mara, both his and Mara’s mothers, Earthlings director Shaun Monson, Los Angeles Animal Save Founder Amy Jean Davis, and Farm Sanctuary President and Co-founder Gene Baur. Phoenix facilitated the transfer of the cows—whom he named Liberty and Indigo, after his sister and her child, who passed away—to Farm Sanctuary to live out the rest of their lives in peace.

Monson documented the rescue and, a year later, released new short film Indigo, made in partnership with LA Animal Save, about Phoenix’s return visit. In the film, an emotional Phoenix described the rescue in grueling detail, and offered insight about his experience at the slaughterhouse—the first time the award-winning actor has interacted with animals destined to become food in this way. Upon arrival, Phoenix noticed “hundreds upon thousands” of animal hides hanging on the fence at the slaughterhouse which gave him great pause and then encountered Liberty and Indigo in a state of fear.

“I got a sense of how they must be feeling and how terrifying their lives have been thus far,” Phoenix said. “The transportation from the feedlots or where they were raised and being trucked over to the slaughterhouse, and, of course, hearing the sounds of the slaughter that are happening inside and seeing the cows that they knew being pulled away and brought inside, [and] clearly the smells. They have to understand what’s happening.” In speaking about removing Liberty and Indigo from the slaughterhouse, Phoenix said, “There was this great relief in knowing that they had been rescued from this factory of death.”

Phoenix reunites with the rescued cows

Phoenix repaid a visit to Farm Sanctuary, alongside his sisters Liberty and Rain, to see the cows living alongside other rescues at the animal sanctuary. “My only interaction with cows in the past has been seeing them on the road when driving,” he said. “So when I went into the enclosure, I was surprised to see how at ease they were with us; how welcoming. It was almost like being with somebody’s dog or horse … there was a real warmth and intelligence in their eyes … there was clearly a unique soul in there.”

Now safely living with her mother at Farm Sanctuary, Indigo—whom Phoenix carried out of the slaughterhouse on his own—seemingly remembered the actor after a year and is seen nuzzling Phoenix. “There was no way she would come up to me when we first met yet,” Phoenix said. “Yet here now, feeling the safety of this place, knowing that these humans had been there to care for her and the other cows … she came up with curiosity. She didn’t feel scared of me.” Phoenix explained that he saw Indigo nursing from her mother. “It’s their natural behavior; so often we interrupt that. These are unique lives and they deserve autonomy and freedom to live whatever lives they wish,” Phoenix said. “I’m just thinking about the billions of animals that we kill for our consumption, for our hats or wristbands or shoes or belts.”

In addition to sharing his story about the emotional rescue and reunion, Phoenix addressed viewers about the pressing issue of climate change in relation to animal agriculture. “We spend one day each year paying homage to our planet, Earth Day, but the other 364 days, we consume with impunity,” Phoenix said. “It’s undeniable the detrimental impact that animal agriculture has on the environment. This simple act of rescuing Liberty and Indigo … in some ways, it’s just as simple as sparing the lives of these creatures. But it’s also an acknowledgment of not only the destruction they experience at our hands but the environment as a whole. By our actions, we either have the choice to continue to destroy other beings and the environment, or we begin the process of reversing the damage that we’ve done.”