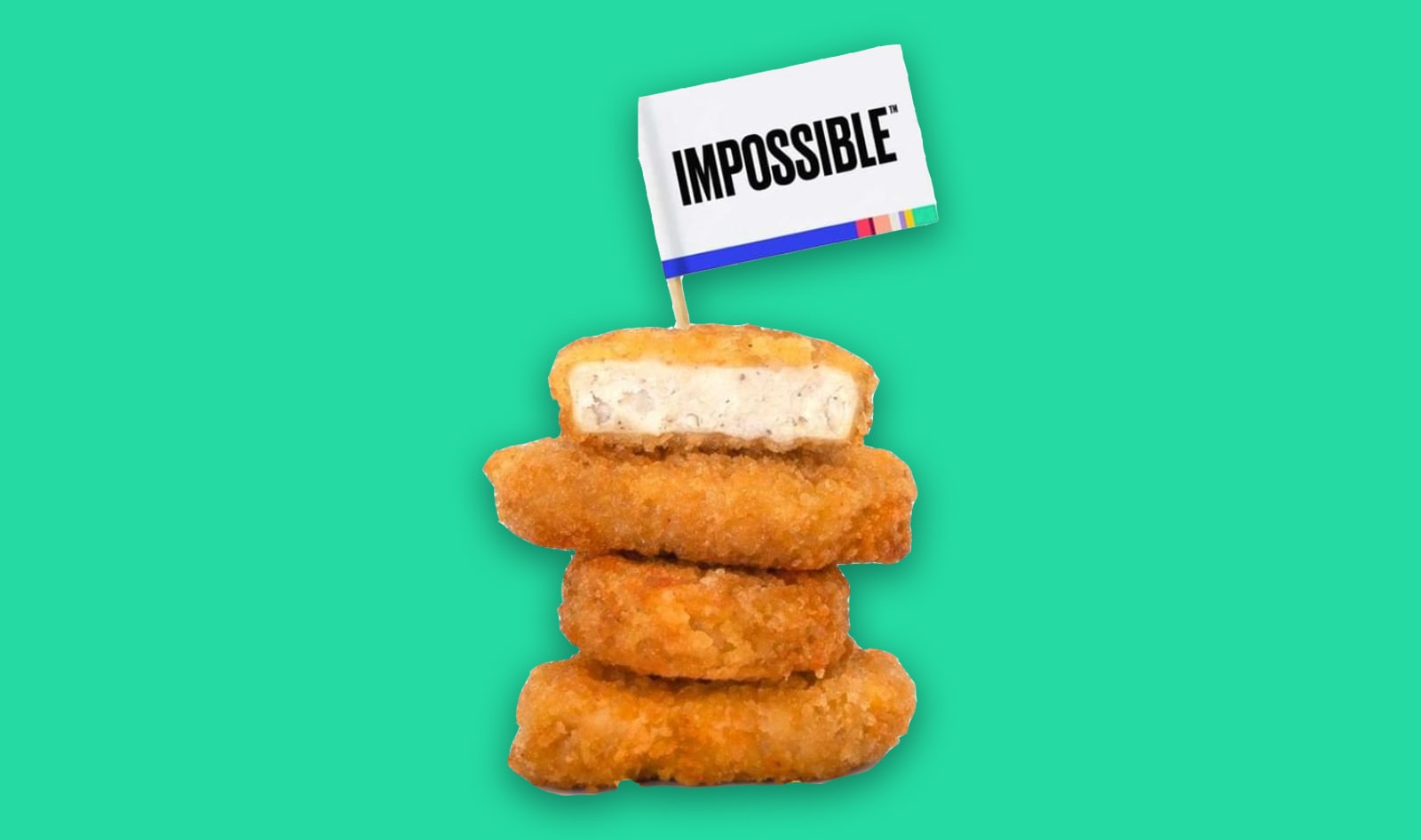 This fall, Impossible Foods will launch plant-based chicken nuggets in the foodservice sector. The new Impossible Chicken Nuggets, the company’s first chicken product, will be unveiled at the DOT Foods (the country’s largest food redistributor) trade show next week to show operators the potential of its plant-based chicken. The Impossible Chicken Nuggets will be made from sunflower oil and texturized soy, potentially from non-GMO sources, and are expected to expand to the retail sector once they launch in the foodservice channel—which may include school lunch menus.

In May, Impossible Foods secured a Child Nutrition (CN) label—an accreditation from the United States Department of Agriculture (USDA)—which allows its Impossible Burger products, both patties and bulk, to be served for breakfast and lunch in K-12 schools nationwide. Chicken nuggets are found in many school cafeterias across the country and Impossible’s new plant-based nuggets were made as a viable alternative.

Up until now, Impossible Foods has been known best for its Impossible Burger, which replicates beef with the help of soy leghemoglobin (“heme”), a hero ingredient that gives the plant-based patty meat-identical qualities. The new Impossible Chicken Nuggets will not contain heme, an ingredient the company tried in its formulation process but found to be superfluous in its new chicken product. 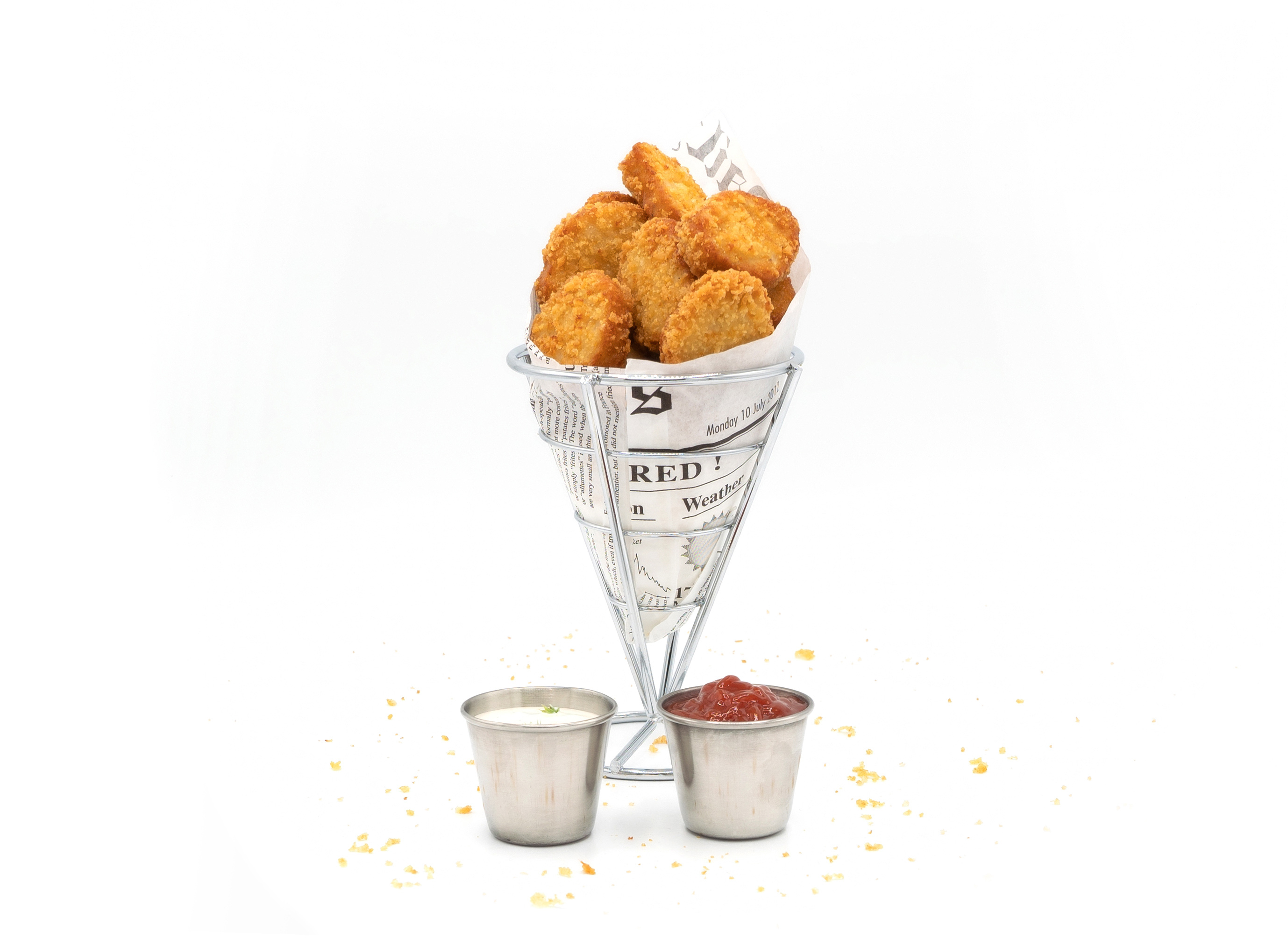 And while Impossible Foods now has a few plant-based meat products under its belt—and a prototype of “functional” plant-based milk—the disruptive company aims to create viable plant-based alternatives to every animal-derived food within the next 14 years. “Our mission is to completely replace the use of animals as a food technology by 2035. We’re dead serious about it and we believe it’s doable,” Impossible Foods CEO Pat Brown said during a recent conference. “I was confident that we would succeed when I launched this company, and now I’m completely confident. It’s game over for the incumbent [meat] industry—they just don’t realize it yet.”

Beyond Meat gets into vegan chicken

Impossible Foods and Beyond Meat have been going toe-to-toe for the last five years in their race to replace beef and pork with plant-based alternatives on store shelves and foodservice menus around the world. Now, both brands are tackling chicken, with Beyond Meat’s version making its way to restaurants first.

Last week, Beyond Meat announced the launch of its Beyond Chicken Tenders at approximately 400 restaurants, including pubs, bars, traditional chicken wing shops, and vegan chains. The tenders aren’t Beyond Meat’s first foray into vegan chicken—it offered (now discontinued) plant-based chicken strips in 2012. However, its innovation team has spent a decade perfecting vegan chicken that replicates its animal-derived counterpart. The breaded Beyond Chicken Tenders are made from a blend of faba beans and peas and have already received an award from the National Restaurant Association which called them “a must-have menu item that will elevate your menu to compete in the Chicken Wars.”

The carnage of the chicken wars

Billions of chickens are tortured annually to create nuggets, wings, and tenders and chicken meat is now in short supply due to disruptions in the meat industry brought on by the COVID-19 pandemic. Demand for chicken has also skyrocketed due to the so-called “chicken wars” sparked by the popularity of chicken sandwiches at chains such as Popeyes and Chick-Fil-A—with new entrants into the chicken wars further putting pressure on the meat industry to pump out cheap chicken at the detriment of animal welfare.

However, plant-based companies such as Beyond Meat and Impossible Foods are entering the chicken market at an opportune time. As fast-food chains struggle to stock animal-derived chicken and the meat industry struggles to close the gap in production exposed by the pandemic, vegan chicken is starting to become a very attractive alternative.

In 2019, KFC aimed to differentiate itself from its chicken chain competitors by adding Beyond Fried Chicken to its menu at one location in Atlanta for one day. There, the vegan chicken was made by Beyond Meat and sold out in less than five hours. KFC went on to expand the test market to various locations in the South and in Southern California but has yet to launch Beyond Fried Chicken nationally. Given that Popeye’s is reportedly stockpiling chicken as it prepares to launch its own chicken nuggets at the end of the month, a move into the vegan chicken direction could prove profitable for forward-thinking chains.

One chain that’s getting ahead of the chicken wars is Panda Express which is about to test a vegan version of its famed orange chicken created in partnership with Beyond Meat. Starting July 26, Panda Express will add the Beyond The Original Orange Chicken—which features the same taste, crunch, and tangy sauce as the original but without any animal products—to select locations in New York City and Los Angeles for a limited time with the aim of a larger rollout after the test launch.

You Can Become the World’s First Vegan Meat Sommelier